Water cooling your gaming PC – All the benefits 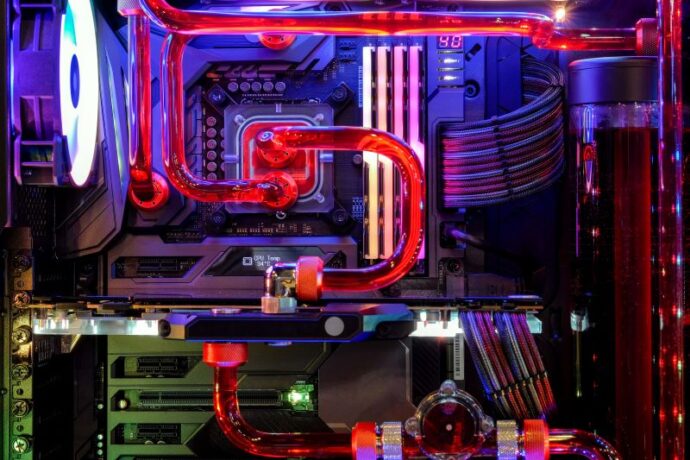 While the latest gaming consoles like the PS5 and ready-made solutions like the Steam Deck are all well and good for some, for true gamers, there is no alternative to building your own gaming rig. The ability to customise your gaming PC to look and perform the way you want it to is a benefit PC gamers have been enjoying for generations now and the complexity and sheer amount of options available are what makes it so enticing. Your bespoke rig is always going to be one-of-a-kind.

But one area that often gets overlooked is the cooling system. Because, if your rig is going to be pumping out that much power it’s also going to be generating a lot of heat and without proper cooling, your parts will fail, and you’ll be left with a very expensive paperweight. But while the PC gaming rigs of old might have used massive fans that sounded like jet engines ready for lift-off, there has been a move towards a decidedly quieter and more elegant solution in recent years.

The way of water

While you might initially believe that water is the last thing you’d want anywhere near your expensive computer, liquid cooling is a phenomenon that has taken off in leaps and bounds over the last decade. Also referred to as water cooling, this is a form of cooling that uses water blocks and coolant to keep your computer’s insides chill rather than large, motorised fans.

It works by pumping coolant through tubes that pass over all the parts of your rig generating the most heat. The coolant is kept chill by a series of water blocks, which are the equivalent of the heatsinks. It’s a system that is silent, looks incredibly cool and isn’t as expensive or difficult to install as you might think. You will, however, need to refill certain water blocks and we would always recommend using filtered water to avoid contaminants making their way into your system.

The benefits of water cooling

The most obvious benefit of a water cooling system is the aesthetic difference. Not only does it look great, but it makes far less sound, so it’s ideal for streamers or those living in shared accommodation. But the benefits are more than just skin deep.