The 5 best water parks in the world 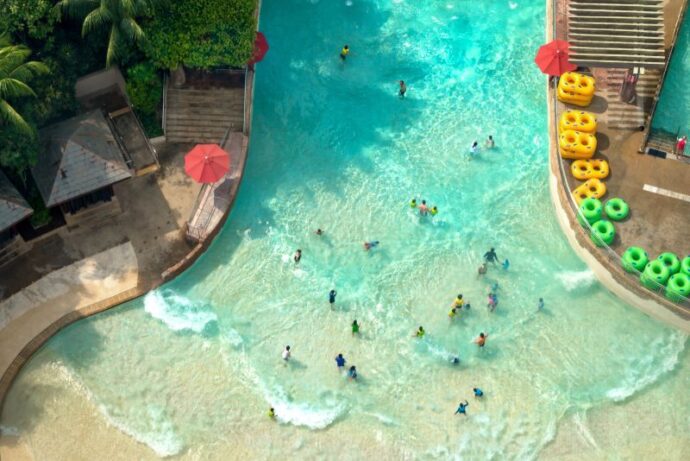 Water parks are a relatively modern invention but, for many of us, our holidays in the sun wouldn’t quite be the same without them. As the name suggests, the idea is to take the thrills and theming of something like Disneyland or Alton Towers and replace the roller coasters and dark rides with water slides and lazy rivers.

There are over 1,000 water parks in the world, with most of them located in warmer climates and tourist towns. But, as you’ll see in our list below, it’s not the location that makes a water park great; it’s everything from the theming and the quality of the rides to the layout, the atmosphere and, of course, the water.

While the first water park to debut in Orlando’s Walt Disney World did so all the way back in the 1970s and was arguably the very first themed water park, River Country unfortunately no longer exists. Disney’s second water park, Typhoon Lagoon, arrived in the 80s but it was in the 90s, with the arrival of Blizzard Beach, that Disney really hit its stride. The arctic sun theming here is incredible and the central “Summit Plummet” flume is one of the most striking plunge rides in the world, even after nearly 30 years.

Located on the picturesque island of Tenerife in the Canaries, Siam Park is the kind of place you would expect to find in Dubai or California and boasts some exceptional theming alongside its extreme rides. The space is huge and ensures that the long lines you’ll find at other similar parks are rare and there are loads of swimming pools and beaches for relaxing too.

The most recent entry on our list is Universal Orlando’s bid to outdo Disney at their own game. And they largely succeed. Built around a central volcano with an incredible plunge drop slide and containing one of the most ambitious water rollercoasters in the world, Volcano Bay is easily the most exciting water park in Orlando right now. The lazy river is also the one to beat in our eyes.

Located inside a former aircraft hanger in Germany, Tropical Islands is a gigantic indoor water park that can be seen for miles around and features its own beach, countless slides and five distinct themed areas. Located just south of Berlin, it’s comfortably the most interesting entry on this list and, as it’s indoors, you can even enjoy it on a rainy day. And they get a fair few of them in Germany.

Dubai is one of the wealthiest nations on the planet and has spent the last few decades cultivating a reputation for itself as the decadent playground for the rich and powerful. Situated amidst the glitz and glamour of the outrageous palm-shaped cluster of islands (called, of course, “The Palm”), Aquaventure is not only the world’s largest water park but includes everything from ziplines to shark-infested lagoons too. Take everything about the other parks on this list and turn it up to eleven.