The Wonders of Water Wheels 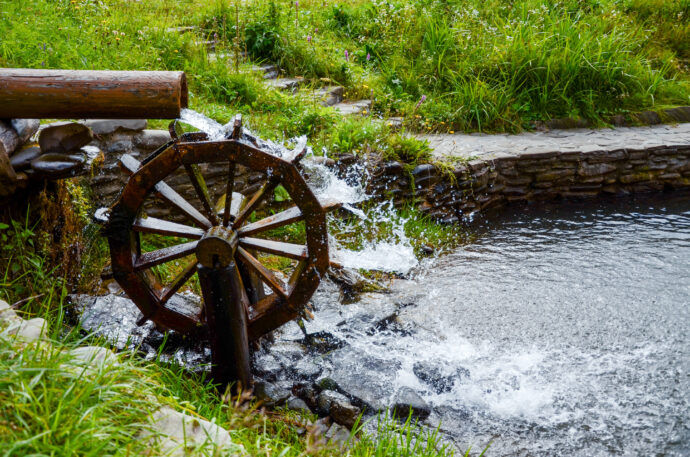 The ingenuity of mankind will always be something to marvel at. Looking back at the different ideas that brought us to where we are today – especially when it comes to energy generation – can often be an enlightening experience…

We’ve taken a peek at inventions in the past, but what about the humble water wheel? This contraption has been around for a long time; providing us with innumerable benefits before its near obsoletion in the modern-day.

Where it all began

Back in the 4th millennium BC era, the wheel is said to have been invented in what we now know as Iraq…okay, perhaps that’s too far back. Let’s restart.

It is believed that the idea of the water wheel first appeared around the time of 4000 BC; back then, something called a “Shaduf”. This is essentially a lever system – utilising a bucket – to gather water for irrigating crops. At the same time, another knick-knack that was in use was “Quern Stones”; a small, hand-operated tool, used to grind up grains. These were improved by becoming larger between 500 – 400 BC, using beasts of burden to do most of the work

Of course, building creations in 4000 BC was a lot harder than it is today; the water wheel – the combination of these two smaller inventions – is likely to have come about somewhere between 500 – 100 BC. The earliest dated water wheels only go back to 200 – 100 BC, but water mills have been known to exist since 400 BC.

Regardless of the specific date, this still gives water mills the title of ‘earliest automated machine’; with water defined as its continuous power source, of course.

Greece made some more significant advancements on the idea, developing the first wooden gears around 250 BC. These would add even greater strength – and efficiency – to the building.

All Shapes and Sizes

Whilst their use is very specific – given the need for high power and velocity to keep them turning – the horizontal water wheel did fill a niche that was needed at the time. These were often placed on mountain slopes, siphoning the power from springs, as this was the best way to keep them grinding grain at a good pace. As time went on, people began to realise that the vertical water wheel was the way forward.

Without the need to be halfway up a mountain, the vertical water wheel was a major improvement. Not only could we now make use of more power rivers and streams, but we also had a way to efficiently collect the water and use it for other purposes, such as irrigation, as well. These are known as “Noria” water wheels and paved the way for greater things.

Overshot water wheels followed this once more, but with a different means of power in mind. As opposed to using the river or stream directly, the Overshot water wheel would harness the flow of a dam and a canal. Having a full force of water hit the blades of the wheel from the top – being driven even harder by gravity as a force – meant that this water wheel become the most effective for a time.

But now, those are all but distant dreams. The water turbine, hydropower, and tidal power have rendered these simple yet effective creations obsolete. Want us to dive deeper into the watery world of inventions? Perhaps we’ve covered a creation in the past that you want a deeper look at? Let us know!