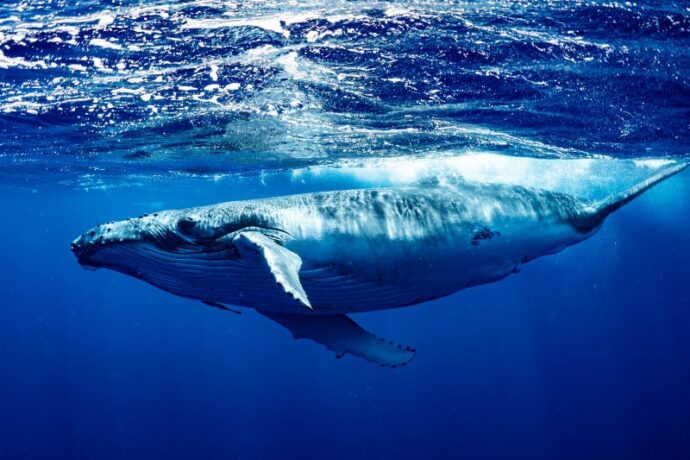 Today, we’ll be focusing on the former and taking a look at some of the largest sea creatures in the world in the hopes of understanding perhaps what it is that makes them so fascinating and so mysterious.

The undisputed king of the ocean. The blue whale is not only the largest sea creature, it’s the largest known animal to have ever existed. And that includes the dinosaurs. Weighing as much as 441,000 pounds (or 31,500 stone), not only are their hearts the size of literal cars but they make so much noise they can be heard approaching from over two miles away.

Despite their size, however, they are largely docile creatures, which is perhaps part of the reason they almost went extinct in the 20th century. Whaling bans have helped in the years since but blue whales remain an endangered species.

You wouldn’t normally consider a Jellyfish to be particularly intimidating (aside from the debilitating sting, of course) but the Lion’s Mane is actually the longest creature in the world, reaching up to a whopping 120 metres thanks to its spiralling appendages.

Also known simply as the Giant Jellyfish (for obvious reasons), the Lion’s Mane is more common in the Arctic, though they have been spotted in the English Channel. They are named for the way their tentacles resemble a lion’s mane and rarely venture further than 20 metres below the surface. So watch out if you’re ever swimming the channel!

You know this one is going to be on the larger side given the name but for many years, the Giant Squid was actually assumed to be something of a myth. While photos existed, footage wasn’t captured of the creature in its natural habitat deep in the ocean until 2012.

Since then, scientists have learned a lot about the Giant Squid, which is around 12 metres long and can stretch its tentacles to catch prey as much as 30 feet away! It’s thought the Giant Squid is also what inspired the stories of the Kraken. It’s easy to see why.

Known in some circles as a “sea serpent,” the Oarfish is so-named as it kind of looks like a gigantic oar. This lanky beast lives over 3,000 feet under the sea and are completely scaleless. Perhaps most shockingly, however, is their length – a whopping 8 metres.

They also boast gigantic eyes (to help them see in those dark and briny depths) and are rarely seen on the surface. In fact, the only ones that have been seen up close are those that have died and washed up onshore. It also boasts the honour of being the largest fish with bones.

At only just under 4 metres, this guy isn’t quite up to the dizzying heights of the other creatures on our list but it’s still a pretty impressive creature. Based, as you’d expect, off the coasts of Japan, this crab is the largest living arthropod and can grow its legs to extreme lengths while its body remains the same size.

It’s also absolutely terrifying (looking like something from a 50’s science fiction film) so it more than deserves a spot on our list.