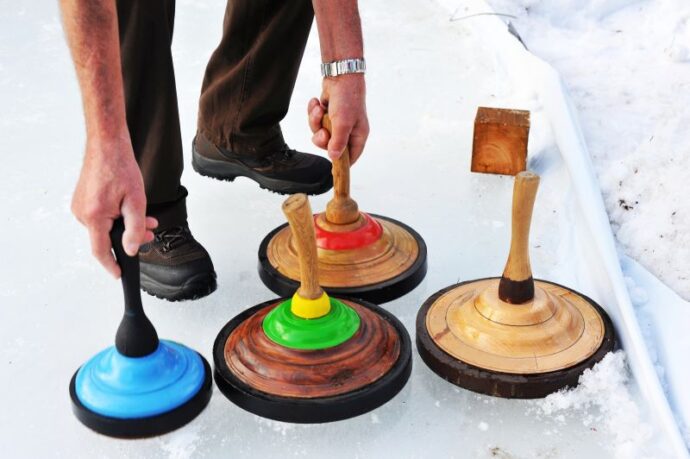 Sports are a pretty incredible thing. Not only do they keep us active and engaged with each other but they can be incredibly fun and rewarding pastimes and even potential careers. But just because the long nights and cold weather have started setting in does that necessarily mean sporting activities are off the cards?

You might not be willing to pop out for a quick game of football or tennis when it’s approaching 0 degrees outside but there are plenty of winter sports that can be enjoyed over the festive season. Indeed, there is a Winter Olympic Games for a reason and many of the following sports are only possible in literal freezing weather.

Of course, we’ve all at least considered skiing or snowboarding but here, we’ll be looking at a few of the less generic winter sports you might want to try out this year.

If you’ve ever played a good old fashioned British game of Bowls then you’ll be right at home with Curling. With its roots in 16th century Scotland, the game has earned the name “chess on ice” in some circles thanks to its highly tactical nature. The idea is for teams to slide a stone along a sheet of ice towards a target while teammates use brooms to create friction and steer the puck home. The tactics, however, come into play when the other team tries to dislodge your pucks with their own shots.

This is something you might have done when you were little without even realising it but spade (or shovel) racing is actually a big deal in New Mexico where it was invented in the 1970s. The idea is simple – it’s like sledging only you use a spade instead of an actual sledge. Note that it can be a dangerous game on steeper hills though so wear protective gear if you decide to take the space out next time it snows.

While it’s unlikely to get cold enough in the UK to sit out on an icy lake with a rod without falling in, there are plenty of European and North American destinations that are ideal for it. As the name suggests, ice fishing involves cutting a hole in thick ice and dangling your rod into it to catch your supper. It’s a major event in certain parts of the globe, with makeshift tents and huts built to house ice fishers and their drinking buddies. Not exactly an extreme sport though.

While we certainly wouldn’t recommend going swimming in zero degrees water for more than a few minutes at a time, in some cultures, it’s seen as a very healthy practice. Swimming in water that’s close to freezing is thought to help sufferers of asthma, improve blood flow and even improve memory function. In Russia, it’s even seen as more of a religious event than a winter sport.

Last but not least, a skeleton bobsleigh is a traditional form of bobsleigh involving just one opponent instead of four. The rider travels down a massive tunnel carved from ice, head-first, at insane speeds. It’s just about as extreme as ice sports get and is utterly terrifying to watch. But the sport, which was invented in Switzerland in the 19th century, is an exhilarating event that has become a firm favourite of winter games since the turn of the century.

The world is full of “beauty hacks” some of which are genuinely helpful and others that can be borderline dangerous. […] read more