3 experiments with water for kids 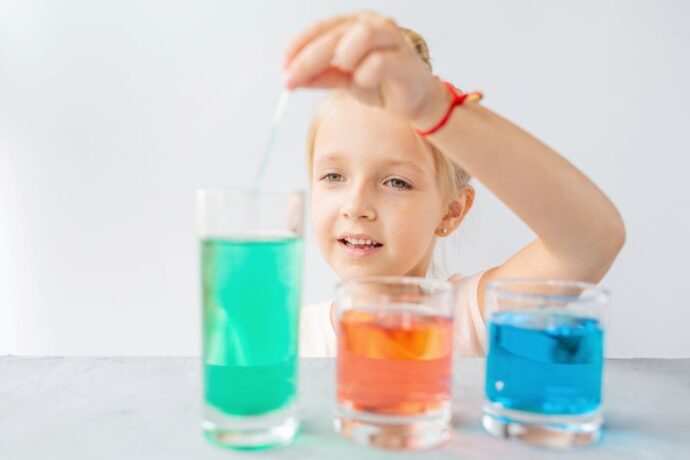 Kids love playing around with water – parents, not so much. Still, provided there’s not too much spillage or, if there is, it’s in a place where it doesn’t matter like the back garden, then it’s a great way for youngsters to have fun and learn science at the same time.

How does water temperature affect the fizz of bath bombs? The way to find out is to get three large jars and three similarly-sized bath bombs made the same way.

Fill the jars with a selection of different water temperatures i.e. the first with cold water from the fridge, the second lukewarm water from the tap and the third hot water from a kettle. Now pop one bath bomb into each jar and time how long it takes for each bath bomb to dissolve completely.

Conclusion: the hotter the water, the more energy it has to dissolve the bombs.

Water can walk – as the kids will see in this water experiment where colours blend over time to create a rainbow. All you’ll need to get going is five clear glass jars or plastic cups, food colouring (red, blue and yellow), a pair of scissors, a spoon, and two paper towels. Oh, and you’ll also need water, of course.

Now place one half of a rolled paper towel in the cup and the other half in the cup next to it (the empty second cup). Get another paper towel and put that from the second cup into the full third cup. Keep going until you get to the fifth cup.

@made in a pinch: “The paper towel is made of fibre. Water travels through the gaps in the fibre like straws pulling the water upward. This is the exact process that draws water from a plant’s roots to the leaves at the top of the tree or plant.”

Watch as the coloured water starts to travel up the paper towels and eventually meet up. You may have to wait up to 45 minutes for the ‘rainbow’ to complete but it’s fun leaving then returning to see how far the colours have moved.

See the effect adding mineral salts has on water by getting two empty plastic bottles with lids. Fill each bottle halfway up with water and add two teaspoons of Epsom salts to one of the bottles. Put the lids on and shake the bottle with the Epsom salts in it so that the salt can dissolve.

Next, add washing up liquid to each bottle, put the lids back on and shake. One bottle will have lots of lather in it, the one with the Epsom salts will hardly have any. This is why it’s more difficult to wash clothes and dishes in a house where there is hard water and why having a water softening system can help.