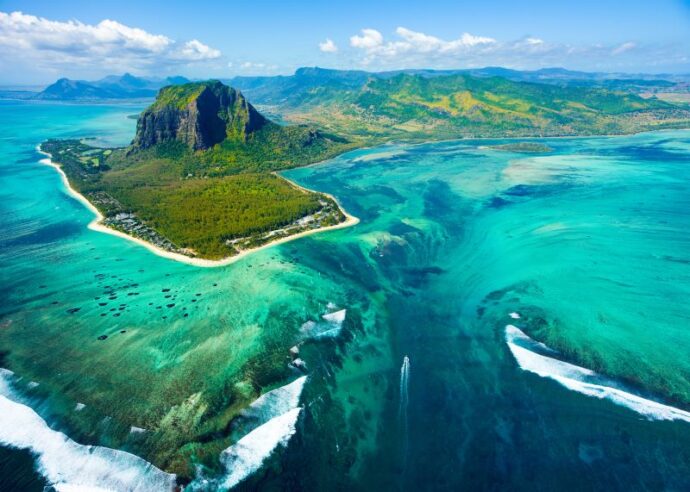 1. The majority of all life on earth is aquatic

It is suggested that 50-80% of all life on earth lives within our oceans and other watercourses.

To account for such a large amount of living creatures, when adding up the space on earth as a whole, oceans and water makes up around 99% of all the available living space on our planet!

These occur when a separate water source in the ocean seeps up through a thick layer of salt and becomes denser after depression. Rivers, lakes, and waterfalls are present within our oceans because of this.

Given the previous fact, this ties in nicely! Earth’s largest waterfall is indeed a product of the process outlined above.

It is situated in the ocean between Iceland and Greenland after merging with a denser body of water from Denmark.

It works by having the cold water flow underneath the warmer water, dropping from a staggering height of 11,500ft.

Known as the Mid-Oceanic Ridge, this is the largest mountain range on earth; it isn’t regularly mentioned in terms of mountain and ranges due to it being underwater.

The whole ridge is a collection of Mid-Ocean ridges, which are mountain systems formed by plate tectonics, such as with other mountains.

The total length of the entire connected ridge is 40,390 miles!

5. The depth of the Mariana Trench

This famous trench is located within the western pacific ocean and is the deepest underwater trench on earth.

The well-known depth of the trench is 34,101ft, but some measurements have yet to be repeated to confirm a depth of 36,200ft.

As a reference point, Mount Everest is 29,032ft, meaning even at the slightly small depth of 34,101ft, Everest would still need to grow an additional 5,069ft to peek above the trench!

6. Vents at the bottom of the ocean make it much hotter

These vents are defined as being, “fissures on the seafloor from which geothermally heated water discharges.” These are most often found around highly volcanic areas of the ocean.

The ocean gains its colour due to the way it absorbs light from the sun.

The water naturally absorbs the red colours of the spectrum, whilst filtering out the blue colours; due to the way colour operates, the unabsorbed colour is the hue the object takes on.

Water can also take on red and green hues however, this is often the case when light bounces off the sediment atop the ocean.

In the ocean, there exists a massive amount of gold! It seems the crazy gold miners of the west should have invested in building submarines!

There is around 20 million tons of undissolved gold hidden with the ocean, embedded in its floor.

If this were to be distributed evenly, it seems that every person on earth could have around 9 pounds of it!

9. The ocean provides oxygen for us

Much like the life within our waters, the oceans are believed to give the earth around 50-80% of its total oxygen. This might explain why so much of the Earth’s life lives within our waters?

The oxygen within our oceans is created through the photosynthesis that plankton, algae, and other lifeforms perform.

10. Most of Earth is completely dark

With the overwhelming depths of the world’s oceans, it should come as no surprise how dark the ocean is, but at what point are we in dire need of a torch?

The rays of light from the sun can only penetrate up to 330ft of water, which isn’t very much in the grand scheme of things.

Assuming the rays don’t hit the ground, and taking in the average ocean depth of 12,100ft, natural light can only reveal the first 2.7% of the underwater world past the surface of the ocean!

A bonus fact for you:

Here at Total Soft Water, we help provide water services for all of your day to day needs. In need of cleaner, crisper drinking water? Check out our water filters! Need to reduce the amount of hard water in your home? We have water softeners too!