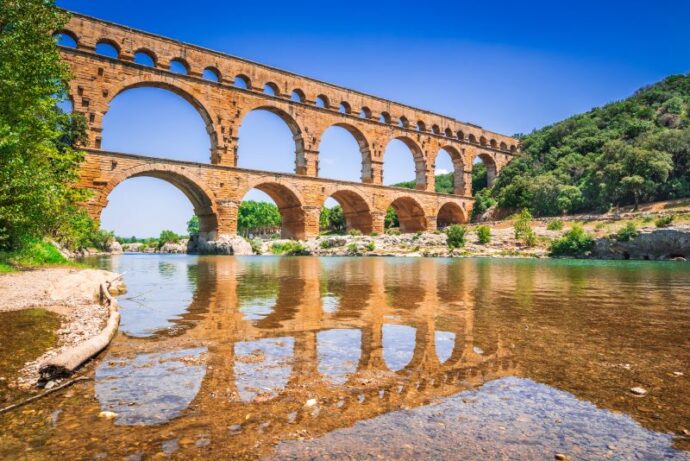 In the modern world, we have developed multiple systems that use water in many ways. Today, we take a look at the inventions that came before the showers and toilets we are now so familiar with, and shine a light on the myriad uses of humble H2O.

Humans are believed to have used boats for the first time around 8,000 years ago! The oldest known boat is roughly dated to around 6315BC.

In those days, boats were essentially just hollowed-out tree-trunks, known as the humble ‘logboat’ or ‘dugout’.

These were used for thousands of years to travel across small bodies of water. It wasn’t until the Egyptians invented larger boats, involving sails and oars, that the idea of the ship was truly born.

Irrigation was never a foreign concept; it was known that crops needed water to survive and grow into food.

For many years, the idea of irrigation simply worked upon running to the local well and throwing the water over the crops.

Our friends in Egypt (once again) used an automated system to simplify this process. When the Nile flooded, they would divert the water into their fields, making the farming process much easier.

Terraced irrigation is another interesting method that popped up around 4000BC, used within Asia and South America. This process used the water from mountains and springs to travel down each terrace of the farm.

Possibly one of the most well-known water inventions alongside number 4 on this list.

Aqueducts (or the idea of them) have existed since the Minoan civilisation of around 2000BC, progressing all the way to 200BC.

These were most often created as canals and underground passages, travelling short distances and following the lay of the land. This allowed people to transport water short distances.

It wasn’t until the Romans came along that the impressive image of the aqueduct that we now know sprang into being.

By building large structures, they could bypass the obstacles on the ground, allowing them to transport water great distances and supply it to whole cities.

These were first invented by the ancient greeks, around 3000BC.

Waterwheels revolved around using the flow of water as a form of power, primarily being used to operate machines used to make flour or paper.

By around 100BC, the water wheel had been converted to a horizontal type, used by the Chinese.

Eventually, these spread all across Europe and became widely used during medieval times for the same purposes as above, as well as irrigation, and would eventually be used for the shaping of iron.

Perhaps a little obscure, but a whole lot more intriguing!

The water clock is one of the oldest forms of time measurements to exist.

They were made by using one of two methods, an inflow or outflow piece, to then allow the measurement of the water to accurately depict the time of day. The containers would have markings that allowed this to take place.

These are known to have existed in Babylon, Egypt, and Persia around the 16th century, BC – but other countries, such as China and India, have shown signs that they were used there too!

When water clocks were invented, they were calibrated in accordance with a sundial to give them accuracy. The idea likely spread through trade, resulting in them seeing more widespread use in the period.

If you would like us to explore the water-based inventions of the modern-day, let us know! For now, some of the best ones include water filtration and water softeners.