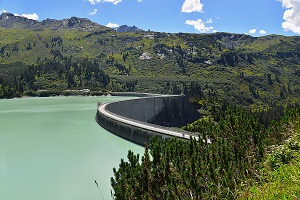 Dams are built to restrict or hold back water, raising its level to form a reservoir. The water in the dam may be used for water supply or for electricity. Some dams are built to suppress flood water, protecting communities, and agricultural land.

Dams can hold huge volumes of water, for example, the Hoover Dam in Nevada, USA, holds around 10 trillion gallons of water. This is enough water to cover the US state of Connecticut 10 feet deep in water.

What Causes Dams to Fail?

When dams fail, they can cause massive devastation, impacting civilian and animal populations and cause huge damage to the environment. The main causes of dam failures are poor construction, geological instability, poor maintenance, human, computer or design error, and earthquakes. However, increase inflow seems to be the main cause of dam failure.

World Atlas explains, “Extreme water inflow from prolonged rainfall and flooding is one of the leading causes of dam failures. Although most dams are designed to survive extreme weather conditions, prolonged seasons of rain and flooding often put pressure on the dam and may cause the structure to collapse. “

Sometimes dams fail through deliberate intervention. An incident of deliberate dam failure occurred during World War 2, the British Royal Airforce Dambusters attack in Germany in 1943 – code-named Operation Chastise. This was where six dams were chosen to be destroyed in order to impact German infrastructure.

Central Java Province, Republic of Indonesia – The Sempor Dam failed in November 1967. During the dam’s construction heavy rain and flash floods caused water to topple over, flooding three towns, killing 160 – 2,000 civilians and causing excessive damage to the area. Construction of the dam did not restart until several years later, it was completed in 1978.

Zhumadian, China – In August 1975, the Banqiao and Shimantan Dams failed after extreme rainfall when Typhoon Nina hit the region. The design of the dam could not endure the shear impact of the typhoon, despite being claimed that the dam was built to withstand a “once in a thousand years” flood.

During typhoon Nina, more than twelve months of rain fell in one day. When the dam failed, 15.738 billion cubic metres of water was released causing mass devastation. The unofficial estimate of casualties was thought to be around 230,000.

Morbi, India – Machchu-2 Dam failed August 1979, when heavy rains and flooding caused the dam to start disintegrating. It sent a huge wall of water, 12 to 30 feet in height, crashing through the nearby industrial town of Morbi.

The estimated death tolls varied but were thought to be 1,800 to 25,000. In addition, the floods caused huge economic loss to the local area because the flood water damaged farmland.

Brumadinho Dam, Brazil – At noon on the 25th January 2019, the dam failed, causing a river of slurry to advance through offices and a packed cafeteria. As it reached downstream, it went on to wipe out houses, farms, inns, and roads. There was a massive loss of life with 248 people confirmed dead and 22 missing.