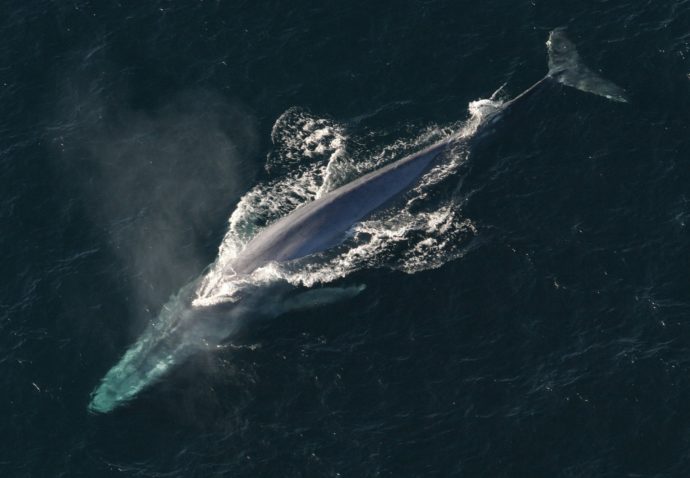 It is thought that 50-80% of all life on earth is found in our oceans. Considering the sheer vastness and depths of our oceans, it is hardly surprising that some of the largest living creatures on earth live underneath the ocean’s surface.

The Blue Whale is the largest known sea creature. These whales live in the waters of the South Atlantic Ocean and are the largest animal known on earth. This beast is huge, it can grow to about 30m in length, that means a Blue Whale is equivalent to a Boeing 373 aircraft, and longer than three buses, its tongue alone weighs 4 tons which is the weight of a baby elephant! In all, an adult Blue Whale weighs around 130-140,000kg. The Fin Whale is the second largest growing to 88 feet and weighing around 80 tons.

Whale Sharks grow to around 39 feet and weigh over 20 tons. A whale shark was recently spotted around the coast of Western Australia, this shark was around 10m in length.

Dr Norman, the lead scientist with Ecocean, has encountered the shark before, saying “I first swam with him in 1996 and he was quite large back then. The last time we saw him at Ningaloo was 2015, and he’s back again now. He’s the biggest one I’ve seen in many years and possibly the biggest ever. I’d say he’s around 50 years old and potentially he could live another 30 years.”

The Manta Ray reaches around 23 feet in width, and are the largest of all ray species. These creatures are not only huge, but also incredibly smart. Manta Rays are intelligent fish that have big brains, they are known to learn quickly, are playful and curious, solve puzzles, and can communicate efficiently.

There are even signs that rays are self-aware, recognising themselves in reflections in mirrors! Manta Rays are not dangerous, in fact, they are very friendly fish, usually seen swimming around divers.

The Colossal Squid is thought to grow to about 45 feet in length, but we still don’t know this for sure. These monster squid is one of the most enigmatic sea creatures on the planet. It can be found at great depths in the ocean, where it hunts its prey.

The colossal squid was thought for many years to be a mythical creature, the stories of the infamous Kraken that would terrify sailors and fishermen around the seas of Scandinavia, attacking their ships and pulling them into the icy waters have been told over the centuries. The stories of the Kraken were thought to be nothing but a made-up giant sea monster, however, the legend turned out to be more fact than fiction.

Lions Mane Jellyfish are the largest known species of jellyfish. With tentacles 120 feet long, and a powerful sting, it has little to fear from wannabe predators. These jellyfish are found around the cool waters of the Arctic and North Pacific Ocean, where they are usually seen floating on the surface, The Lions Mane Jelly has bioluminescent abilities, producing its own light, glowing underwater.