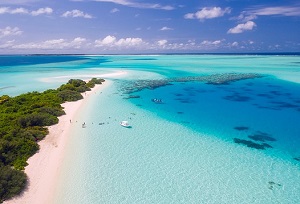 On June 8th the globe will celebrate World Oceans Day. The United Nations (UN) established World Oceans Day way back in 2002, after being approached by the Canadian Government proposing the concept at the Earth Summit in Rio de Janeiro.

Oceans are under threat from climate change, overfishing, pollution, and marine habitat destruction and extraction. More than 70% of our world is covered in water, meaning the oceans’ health has a direct impact on most people. The Ocean Project was set up to promote conservation of the oceans collaborating with organisations such as museums, aquariums, zoos and youth groups. Over the past couple of decades, a global network of countries and organisations has grown to more than 2,000 members, and every year more join to celebrate the ocean and raise awareness of the importance of the oceans to everyone on earth. Between 2004 and 2008 a petition circulated to urge the United Nations to recognise June 8th as World Oceans Day. Tens of thousands of people from around the world signed the petition, the resolution was eventually passed by the UN in December 2008, officially recognising that World Oceans Day would be celebrated on June 8th annually.

World Oceans Day is all about collaborative conservation. There are lots of ways we can participate in raising awareness and celebrate our oceans. Here are a few ideas that you could get involved in.

You can check out events near to you by visiting the World Oceans Day website.