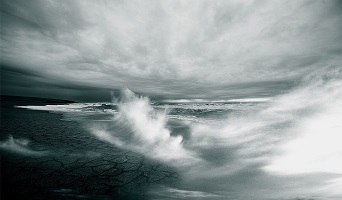 Oceans are vast bodies of water, offering a strange wilderness that is still relatively unexplored by humans. Some of the strangest happenings at sea remain unexplained, with only theories as to why they occur. Some are naturally occurring phenomenon.

This is a weather phenomenon that usually occurs at sea or over water. St Elmo’s Fire is seen during thunderstorms. It is produced by the coronal discharge from a sharp object in a powerful magnetic field, creating a luminous plasma.

The plasma has been seen to appear on ships and aircraft over the ocean during thunderstorms. The phenomenon is named after St. Erasmus of Formia, the patron saint of sailors – its presence is seen as a good omen for sailors.

Where the Seas don’t Mix

This natural phenomenon happens in several oceans on Earth. It is where two seas meet, but do not mix. The border of the Gulf of Alaska and the Atlantic Ocean is one of the areas where you can see where one sea ends and the other begins.

Another area where this occurs is where the Baltic meets the North Sea. This is thought to happen because of different density levels in the water. This oceanic phenomenon is mentioned in the Holy Koran.

Bioluminescence is light that is produced by some marine creatures, usually as a defence mechanism. Marine creatures such as dragonfish, anglerfish, dinoflagellates, squid, jellyfish, and some marine bacteria all produce chemicals that react when exposed to oxygen, causing a light energy to be released.

Bioluminescence can be been seen in many areas of the world, including, Mosquito Bay, Puerto Rico, Manasquan New Jersey, and Halong Bay in Vietnam. Bioluminescence is also seen In Fireflies, Glow Worms, and even some variety of fungus.

Julia Sound is strange annual unexplained audio signal that has been picked up by the National Oceanic and Atmospheric Administration (NOAA) since March 1999 off the coast of South America. The spooky sound was heard when using hydrophones, or underwater headphones.

There have been no explanations for the Julia Sound, although there have been theories that it could be the sound emitted from a huge deep-sea animal, as it sounds like a creature howling.

There are rumours of secret photographs taken from Nasa’s Apollo AA35 which show a large shadow moving through the water in the area of ocean where Julia Sound was discovered. The size was larger than the Empire State Building! The sighting was dismissed as a sea creature as no creature of that size is known to exist.

The Black sea is a large body of water which sits in between Southeastern Europe and Western Asia. The Black Sea is sometimes seen to steam or smoke, this is caused by the humidity of the sea and the coolness of the wind over the water’s surface, it interacts causing the sea to steam. This phenomenon can also be seen in other areas in world such as Lake Superior in North America.