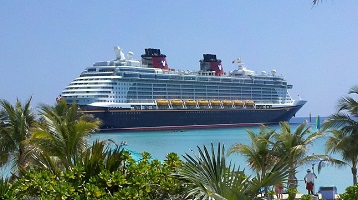 Ever wondered where all the wastewater goes to on a ship? If you think about large cruise ships and military ships that spend weeks or months at sea, when there could be anything from 2,000 to 9,000 crew and passengers on board, these ships are literally floating cities. So, when it comes to wastewater produced on the ship, how does it get processed out in the middle of the ocean?

Cruise ships have had bad publicity over the years when it comes to pollution. The environmental group, Friends of the Earth, have said that cruise ships are nothing but “floating monstrosities, dumping millions of gallons of raw sewage and pollutants into the world’s oceans.” This image seems justified after Princess Cruises were fined a massive £32 million in 2016, for using a so-called “magic pipe” to illegally dump pollutants in waters around the UK.

In February 2009, new regulations meant that the UK could help control a shipping industry responsible for 5% of coastal sewage. However, it is legal for ships to dispose of untreated wastewater into the ocean as long as they are in open sea, defined as being at least 12 nautical miles from shore and travelling at the required speed.

“Raw sewage from cruise ships is similar to standard sewage from the land. It contains bacteria and viruses hazardous to humans, can reduce the oxygen levels in the water, can cloud water preventing light reaching the sea bed (essential for most coral growth) and can introduce harmful levels of nutrients to the environment which could lead to potentially toxic algal blooms.”

It is important that ships dispose of wastewater safely and correctly. Wastewater comes in the form of grey water, which is produced from showers, cooking, cleaning and laundry. Blackwater that comes from toilets, urinals and medical sinks. The average wastewater produced per person on a cruise ship is around 50 gallons per day,  and a ship such as Harmony of the Seas has a capacity of 5,479 passengers, this does not include crew. That’s a lot of waste water!

The wastewater is stored in large tanks before being treated in a membrane bio reactor located in the depths of the ship. Grey water is mixed with the black water. The water mixture is then filtered to take out large particles, and all the nasties are digested by bacteria. The remaining water is disinfected by UV radiation. Chlorine or other chemicals are not used to disinfect the water because this would harm marine life. The treated wastewater is checked for bacteria such as faecal coliform (bacteria generated from warm-blooded animals), before being offloaded in the sea. The environmental regulator at Royal Caribbean International has said that the treated water is cleaner than the seawater might have been before desalination.

Ships can also offload wastewater at port facilities when they dock.