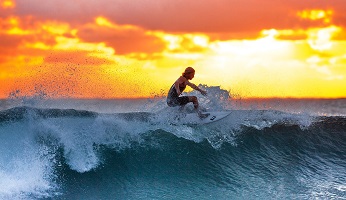 In response to the increasing concern over the health of our oceans, innovative engineers have produced several ideas to combat the problem. One Spain-based company has introduced their latest invention, known as the ‘Seabin’, one they feel may turn the tide against ocean pollution. It’s a relatively simple gadget that acts as an automated, floating rubbish bin that floats on the water’s surface collecting debris.

It is a sad fact that twelve million tons of plastic rubbish finds its way into the world’s oceans every year. Since the 1950s, we have produced staggering amounts of plastic – and only 9% of that plastic has ever been recycled.

Around 80% of plastic pollution gets into the ocean via landfill, while other rubbish enters the ocean though littering on beaches and items being flushed down the drain, industrial leakage and illegal dumping. Once plastics enter the ocean, they drift on ocean currents across the world, meaning that even uninhabited islands have rubbish washed up on their beaches. Plastic has a terrible effect on the environment. We have all see the distressing images of marine creatures and sea birds caught up in plastic debris or starving because their stomachs are full of plastic. It is important that we have healthy oceans; refraining from littering, recycling when possible and disposing items responsibly is the key to protecting the future of our oceans.

How does Seabin work?

The Seabin is not designed for open sea, but the inshore waters of marinas, yacht clubs, ports and rivers. Demand has increased for Seabins over the past 18 months. When the product launched in November 2017, pre-sales were more than 5,000, from 330 marinas in 170 countries.

Surfer and former boat builder Peter Ceglinski, is project chief executive and co-founder of Seabin. He explained the issue to Eco Business:

“The plastic crisis is very new. No one really knows just how damaging microplastics will be for our oceans, and for us. Peter continues, “70,000 tonnes of marine debris could be removed from the ocean every year once the orders are met and the Seabins are put to work.”

Seabin can hold 20kg of rubbish at a time. In one day, in good weather conditions, one Seabin will capture 1.5kg of debris. The most commonly caught items are cigarette butts, food wrappers, straws and stirrers, plastic food bags, drinks cans and foam particles. Seabins are attached to a floating dock, a shore-based water pump running on shore-based power creates a flow of water that runs into the Seabin, with it all the debris. The debris and rubbish are then caught in catch bags and the water sucked out the bottom of the bin and pumped back into the marina.

The very first Seabins were installed in France in rivers such as the River Seine in Paris. In Dubai, Seabins have been installed in yacht clubs and freshwater lakes and rivers. Currently 1.7 tonnes of marine debris is being removed from the water using 600 Seabins. Seabins are low cost, low maintenance and very effective.