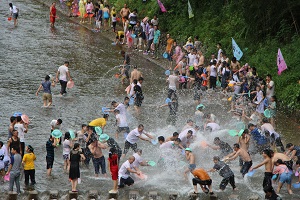 The largest water festival is celebrated in Thailand. The Songkran festival is probably the most famous out of all the water festivals held across Asia. It marks the beginning of the Thai New Year, so the festival takes place from April 13th to 15th.

Chiang Mai, Bangkok, Phuket, and Pattaya have the largest parties – attracting thousands of visitors who want to experience the festival. Everyone has great fun and use everything from buckets to hosepipes to get each other drenched with water.

Buddhists observe Songkran by visiting temples in the morning and offering food to the Buddhist monks. They then pour water over Buddhist statues, to symbolise purification and the washing away of sins and bad luck.

The Vardavar water festival is held fourteen weeks after Easter. Although now a Christian tradition, it was originally associated with the goddess Astghik, the goddess of water, love, beauty, and fertility. Vardavar is an Armenian word which means ‘to pour water over someone’.

“During the Soviet period, this festival’s celebration was more restrained. But after the independence of Armenia, the celebration again restored and became the republic’s most lovely festival.

Jrotsi is celebrated 14 weeks after Easter, on hot and chilly July. This festival has no age restriction, you can easily see an old man pouring water over someone and the opposite, a young even child, playing this funny game.”

In Southeast China the water festival is named the Dai Water Splashing Festival. This is an important date in the Dai ethnic calendar. As with the Songkran in Thailand, the festivities last for three days.

On the first two days the activities are on the banks of Lancang River, where there is an outdoor market for new year shopping, a dragon boat race on the river and at night the river is lit with lanterns.

On the third day, there is a ritual called ‘bathing the Buddha’. This is where monks chant Buddhist scripture and buddha statues are splashed with water. After this, people flock to douse each other in a free-for-all water fight.

This water festival is also known as the Water and Moon Festival. It is celebrated in November and attracts around 5 million visitors; the festival marks the reversal of the flow of the Tonle Sap River.

The festivities happen at the end of the rainy season, when there are celebrations over a three-day period which feature a boat race, boat making, music, dancing, lanterns floating on the river, and fireworks. Bon Om Touk has a carnival like atmosphere with a magical parades of candle lit boats along the river.