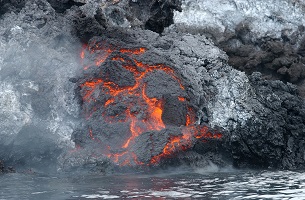 Underwater volcanoes are responsible for 75% of magma output on the planet. These volcanoes are huge; there are 75,000 submarine volcanoes that rise more than half a mile (1 km) above the ocean floor and can spew out basalt that has a temperature of 1,200°C.

Volcanoes will get larger over time, and will eventually break through the surface of the water, forming new islands. This is how the Hawaiian Islands were formed many thousands of years ago.

Geologists have identified around 5,000 active underwater volcanoes in the oceans, but how are they formed? Volcanoes that formed underwater are more difficult to study than land volcanoes because most are in very deep water.

There are some which are found in more shallow water. These volcanoes erupt differently than they do on land. This is because the water instantly cools lava down and causes a shell of rock to develop instantly around the lava, creating a formation called ‘pillow lava’. If the eruption is deeper than 2,000 meters the water pressure is so high it prevents the water from boiling, making it difficult for these volcanic eruptions to be found with hydrophones.

Underwater volcano eruptions are identified by the sounds they give off. There are two eruption types: one is gradual release and bursting of lava bubbles, the other is a sudden explosion of gas bubbles. Lava can disrupt ecosystems and affect marine animals differently than gas.

The Tamu Massif is an extinct underwater volcano in the northwest Pacific, 990 miles east of Japan. It is the largest single volcano on earth. The volcano is estimated to be around 145 million years old; it was only thought to have been active for a few million years after it was formed. Tamu Massif is 120,000 square miles – that’s the size of New Mexico.

In the middle of the Pacific is a giant volcano called Havre. This volcano is still active, last erupting in 2012, where it spewed lava for 90 days from 14 different vents. The last eruption was the largest deep-water eruption in modern times, producing the same amount of ash, pumice and lava as Mount St Helens in 1980.

Havre is between 3,000 and 4,000 feet below sea level, which is thought to be the explanation to why this eruption went all but unnoticed, as the water pressure dampened down the explosion.

In 2015 a group of scientists sailed to the location of Havre, 600 miles north of New Zealand. Researcher, Rebecca Carey told Ocean Find Your Blue, “It blew our expectations completely out of the water. With any ocean floor investigation, there is room for some really exciting discoveries because we just don’t have the understanding yet of how submarine volcanoes operate underwater.”