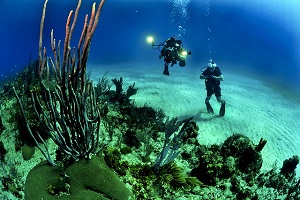 We are all aware that our oceans are littered with natural and manmade debris. Most have heard of areas such as the notorious Great Pacific Garbage Patch, a swirling mass of marine debris dumped in the ocean that stretches 617,000 square miles. However, if you go to the ocean floor it always looks clean. There are no rotting sea plants or decaying fish skeletons – why is this?

Most living things in our oceans have a purpose, and there are some marine animals and plants that keep ocean waters healthy and clean. These “cleaner” animals and plants do just that, keeping the water clear of pollutants, carcasses and maintaining pH levels.

Seaweed and other marine vegetation is a valuable sea cleaner. Sea plants are known to slow ocean acidification. Carbon dioxide from the atmosphere has slowly been absorbed by the world’s oceans, causing it to become more acidic. Since the industrial revolution, ocean acidity has risen by 30% and globally the pH balance has dropped from 8.2 to 8.1, and could drop a further 0.4 units by the end of the 21st century. Sea plants such as kelp and seagrass absorb CO2 and lower acidity to ease the damaging effects on marine life. Sea plants positively affect the PH balance in the water. Coral reefs have been extensively damaged because of acidity. However, experts say that seagrass meadows around coral reefs would boost the growth of coral by 18% because the seagrass neutralises the acidity in the water.

Marine animals play a massive part in keeping the ocean clean. Oysters play a huge role in keeping the oceans clean and full of life. One oyster alone can filter 50 gallons of water in just one day, eradicating pollutants and chemicals in the ocean. They also prevent erosion and help other marine life flourish. Scientists are looking to reintroduce oysters into parts of the sea and ocean where populations have been devastated. The Solent, an area of sea which runs between the mainland and the Isle of Wight in Southern England is one of the locations to have the oyster population replenished.

Cleaner fish are fish that remove dead skin and ectoparasites from other fish and marine animals like turtles. Species such as wrasse, cichlids, catfish, pipefish, gobies and shrimp are all classed as cleaner animals. These animals help keep the seabed clear of skeletons and skin particles.

There are bacteria in the ocean that have been discovered which are thought to feed on plastics, but it may not all be good news. Sustainable Footprint explains:

“The bacteria, found in a region of the North Atlantic Ocean called the Sargasso Sea, is clearly breaking down the plastic, but scientists don’t know if the by-product is environment-friendly waste or a toxin…If a toxin is produced, the effects could be detrimental to aquatic life. The finding suggests that the vast ‘garbage patches’ that have been found in the world’s oceans may be full of living communities.”