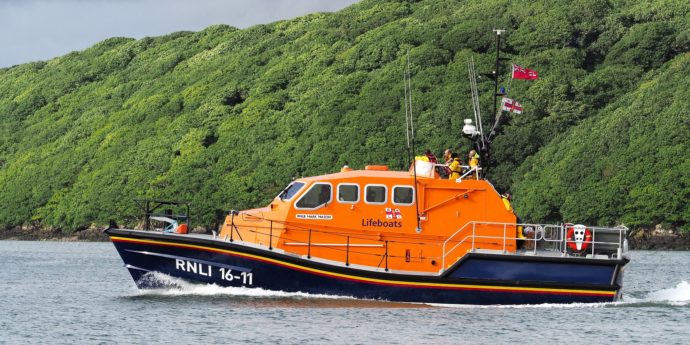 The Royal National Lifeboat Institution (RNLI) is a charity organisation that saves lives at sea. In fact, it is the largest charity of its kind and works all over the UK, Channel Islands, Republic of Ireland and Isle of Man, as well as some inland waterways.

The lifeboat charity is funded by legacies and donations, and provides a 24-hour search and rescue service. Most of the lifeboat crews are unpaid volunteers and its patron is Queen Elizabeth II. There are currently 237 RNLI lifeboat stations in the UK, and it operates 444 lifeboats on more than 200 beaches.

How it All Began

Sir William Hillary had the first idea of a lifeboat rescue survive in 1808, when he moved to the Isle of Man and became aware of the hazardous nature of the Irish Sea. Sir William drew up plans for a lifeboat service, which were eventually approved by MP Thomas Wilson and former merchant George Hibbert.

The National Institution for the Preservation of Life from Shipwreck was founded in 1824. The organisation received Royal Charter and subsequently changed its name in 1854 to The Royal National Lifeboat Institution.

The RNLI played a big part in wartime; during WW1 lifeboat were dispatched over 1800 times and saved the lives of 5,332 people. In WW2, the RNLI was particularly in demand on the south and east coast of England. The RNLI were involved in the Dunkirk rescue operation, during 1939 to 1945 approximately 6,376 lives were saved.

The RNLI is a charity, so it mostly relies on volunteers. There are lots of different jobs available within the RNLI including lifeguards, mechanics, first aiders, shore crew, and much more.

Most crew members have a non-maritime background, so they all train regularly to a high standard and have some of the mostly highly trained casualty first aid givers in the world. RNLI work with international organisations to help with training in drowning awareness around the globe. They are also on call in emergency flood rescue.

Steve Rogerson is a lifeboat helm at Trearddur Bay:

“I have been on the crew for 22 years. When I was young, my dad and I went to Hartlepool Lifeboat Station where I was able to go on two lifeboats, which I enjoyed. When we moved to North Wales, I started work at the Trearddur Bay Hotel, opposite the lifeboat station, and met some crew. I was invited across when I was 17 and some months later, I went out on my first exercise, passed my driving test and received my pager.”

Volunteer lifeboat and shore crew are a vital part of the RNLI. They are available 24/7 and in all weather conditions to go out and save lives at sea. There are almost 5,000 lifeboat crew members at stations around the UK, and 3,000 shore crew members.