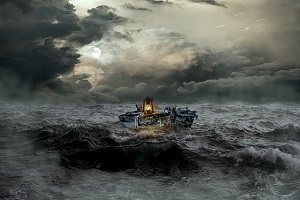 The ocean has always been a source of inspiration to writers. There are so many thrilling stories based on or in the ocean. This could be because we still know very little about it; in fact, we know more about space than we do about our oceans. The oceans are vast, mysterious and powerful, and it has long had its own legends of sea monsters, pirates, and sunken treasures.

Written in 1851 by novelist Herman Melville, the book when initially published earned mixed reviews and was out of print at the time of the writer’s death in 1891. The book did not become a masterpiece until the 20th century, when it became known as a “Great American novel”.  Author D. H. Lawrence called it “one of the strangest and most wonderful books of the sea ever written”.

Moby Dick is based on actual events. The story tells of Captain Ahab’s search to kill a great white whale. Melville was inspired to write Moby Dick after reading a story in a magazine about a whaling ship being attacked by an albino sperm whale. The whale was known for its deadly attacks on ships that were trying to hunt it down; it was eventually killed near Mocha Island off the coast of Chile. That whale was nicknamed Mocha Dick.

This classic adventure novel was first published in May 1883, and is considered the ultimate pirate adventure on the high seas. Treasure Island, written by Scottish novelist Robert Louis Stevenson, features famous characters such as Long John Silver, Billy Bones and Captain Flint, who over the years have become household names.

Treasure island is the story of a young boy called Jim Hawkins who lives in a seaside inn called the Admiral Benbow. A sea captain called Billy Bones dies at the inn after being given a black spot, an official pirate verdict of judgement. Alarmed at Billy’s death and the black spot, Jim unlocks Billy’s sea chest to discover a map and logbook inside. Realising that the contents could be valuable, he takes one of the documents to show Dr Livesey and Squire Trelawney. On inspection they discover that the map shows a buried pirate treasure on a faraway island. A ship sets sail for

Treasure Island, but on the voyage they experience mutiny. Still a popular book today, it was actually originally written for children but became popular with adults too.

Based on true events, The Perfect Storm by Sebastian Junger was published in 1997, detailing the events of a massive storm which hit North America in late October 1991. The book was later made into a film of the same name in 2000.

The book tells of the six-man crew onboard a fishing boat, the Andrea Gail. The 72-foot boat set sail from Gloucester, Massachusetts on a late season fishing trip and encountered a once-in-a-lifetime “perfect storm”.

Sebastian Junger writes in the novel,

“Meteorologists see perfection in strange things, and the meshing of three completely independent weather systems to form a hundred-year event is one of them. My God, thought Case, this is the perfect storm.”

The crew of the Andrea Gail was last heard from on 28th October, off the coast of Nova Scotia.