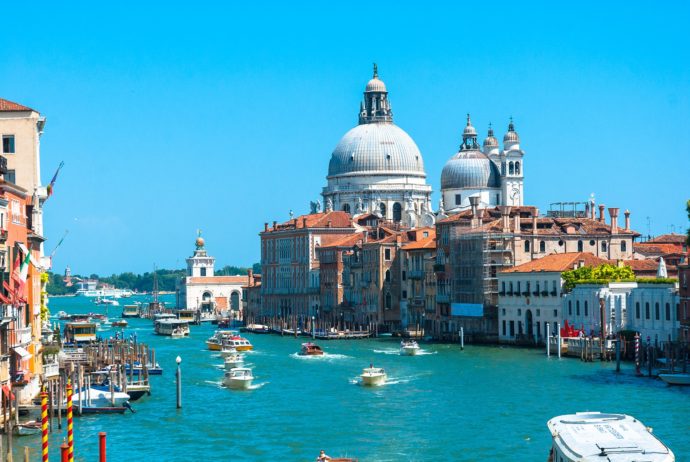 A city, town or village that is built on canal waterways or on small connecting islands is sometimes referred to as a floating city. There are many beautiful floating cities around the world that draw thousands of tourists every year and are well worth a visit.

Venice is situated in the Veneto region in north-eastern Italy, on the coast of the Adriatic Sea. The city is steeped in ancient history and with its winding canals, stunning architecture, and picturesque scenery it’s no wonder Venice is considered the most beautiful floating city in the world. Millions of tourists visit every year to ride the gondolas and explore the maze of tiny canals that weave throughout the city.

Venice dates back as far as 400 AD. It is made up of 117 islands which are linked by waterways and bridges. The famous Grand Canal has the three largest bridges, of which the Rialto Bridge is the most well-known.

Venice was originally built on wooden stilts. The Apprentice and the journeyman explain:

“The wood pilings became the initial foundation. However, there is another question to be answered. Where did the wood come from as Venice did not have any forest? The wood was gathered in a forest far away in the mountains of Slovenia, Croatia, and Montenegro. The timber was then transported by water to Venice.”

Amsterdam is known as the Venice of the North. The city is built on a maze of ancient waterways and was founded in the thirteenth century. The city of Amsterdam was built around the river Amstel, and over the centuries, the city underwent rapid development.

For this reason, only a few of the original buildings still stand today. Amsterdam has always been the trade hub of Europe, with merchants delivering cargo from around the world. It boasts 165 canals that measure in excess of 60 miles. An aerial view of Amsterdam shows that the canals create a pattern of half circles, and the three main canals are Prinsengracht, Keizersgracht, and Herengracht.

Today, Amsterdam is a thriving and cultured city that attracts millions of tourists every year. Visitors can enjoy the beautiful scenery, canal boat rides, and laid-back atmosphere the city has to offer.

The large town of Lindau floats on Lake Constance in Bavaria, Germany. The city is connected to mainland Germany by two bridges. It became a free imperial city in 1275 and was a wealthy merchant town on the trade route from Italy. Remains of a 1st-century Roman settlement have been discovered on the island. In the 13th century, it was home to a monastery.

Lindau has kept its medieval appearance. The old town hall which was built 1422-1436, the church of the old abbey built in 1751, and St Stephens Church which dates to 1180. Lindau remains a popular tourist location, with beautiful scenery, and distinctive Bavarian architecture. There are boat rides around Lake Constance where you can visit three countries at once as the lake borders Austria, Switzerland, and Germany.