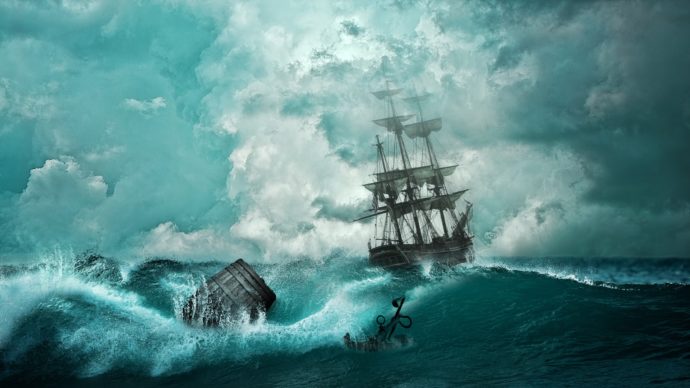 It is thought that there are more than 300 million shipwrecks on the ocean floor. The world’s most famous shipwrecks have left a wealth of loot in the ocean that remains either undiscovered or has yet to be recovered.

With an estimated $60 billion worth of wealth currently unclaimed on the ocean floors, it would take more than 400 years to recover the wrecked ships’ treasure bounty.

Henry VIII’s famous warship sunk in battle in July 1545 off the coast of the Isle of Wight in Southern England. The Tudor ship was in service for 33 years and met its demise while leading the attack on the galleys of a French invasion fleet.

The Mary Rose was rediscovered in 1836, after a group of fishermen caught their nets on some timber on the sea bed. This was the first time that the Mary Rose had been seen in almost 300 years. Some divers examined the area and brought up some Tudor artefacts – such as guns, weapons, and some timber objects.

In October 1982 the Mary Rose was finally raised to the surface after more than 400 years. Relics – such as musical instruments, clothing, tools, and navigation instruments were found – as well as human and animal remains. The treasure excavated from the ship shows an insight into what life was like in Tudor England.

The Spanish Galleon San Jose sank in the Caribbean Sea in 1708. The ship was part of the Spanish treasure fleet. The ship came across a British squadron, the encounter leading to the battle known as Wager’s Action. During the battle the ship was lost, with a crew loss of almost 600 souls.

The San Jose is said to have one of the largest treasure bounties ever discovered. The ship is considered the holy grail of all shipwrecks with a huge haul of emeralds, and gold and silver coins that are worth an estimated $17bn.

Legendary pirate ship the Port-au-Prince sank in the waters off Tonga. The French built ship was captured by the British Navy in 1790, off Port-au-Prince in Haiti, and her name was changed to the place where she was captured. The original name of the ship is unknown.

The ship laid anchor on 29th November 1806 off the coast of Tonga, where King Finau Ulukalala II and the local inhabitants boarded the ship and massacred most of the crew, then burning the ship until it eventually sank.

A wreck discovered off Foa Island, Tonga in August 2012, is thought to be the wreckage of the Port-au-Prince. Sandra Fifita, a tourism official, told the Telegraph:

“The shipwreck was discovered by local diver Tevita Moala. Greenwich Maritime Museum and the Marine Archaeological Society has confirmed the age of the wreck after analysing copper sheathing found at the site.”

The ship is still on the seabed, and it is said that a wealth of copper, gold, and silver is still there with it.