Why are countries with plentiful rainfall still lacking water? 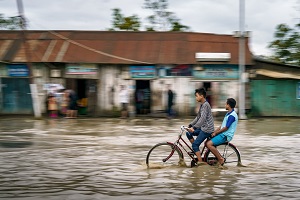 Water charities have warned that some countries are lacking water despite high local rainfall. According to Water Aid, there are millions of people who are affected by safe water scarcity, largely due to climate change. Increased flooding has meant that water supplies have been contaminated.

The number of people with no access to clean water close to home has increased in recent years, and it is now estimated that 63% of the world’s population is without access to clean drinking water.

Madagascar is the fourth largest island in the world, getting an average of 1422mm of rain every year. The island suffers both drought and flooding, depending on the time of year – especially in the southern region. Almost half of the residents on the island do not have clean water.

Liberia is one of the wettest countries in the world. Despite this, around 1.36 million people have no access to clean water. 8 out of 10 people do not have toilets, so they have no choice but to go out in the open, leading to contamination of limited water sources.

Sierra Leone receives an average of 2427mm of rainfall every year, which is twice as much as the UK. When the country suffered an Ebola outbreak, communities struggled to contain the spread of the disease because of lack of clean water. 42% of people in Sierra Leone do not have access to clean, safe water.

Papua New Guinea has an average rainfall of 3055mm each year, yet most of the water in the country is un-drinkable. Around 63% of the population will have to travel more than half an hour to collect water.

“Not having clean water to drink is not, for most people, due to a lack of rain. For the one in nine people around the world – 844 million – who do not have clean water close to home it is usually because there is not enough investment in systems to ensure rainwater is captured, stored, treated and piped effectively. WaterAid calls for governments to prioritise the provision of safe water and works with decision makers to provide lasting services that ensure that no one is left behind. In 2015, world leaders pledged to bring safe water and toilets to everyone, everywhere by 2030. In July, during a high-level meeting in New York, they renewed this promise and now it is time to act.”

With clean water, countries are able to bring down mortality rates and produce more food. This in turn has a knock on effect, boosting economies and stabilising governments. For countries with high rainfall, all it would take are some small changes to ensure that millions more people have access to clean drinking water.