Holy Water: Why is it Important to Christianity? 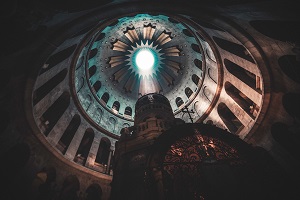 We’ve touched on the subject of water’s connection with religion before, but here we’ll take a deeper look at the concept of holy water and Christianity.

The use of holy water and its associated rituals is of crucial importance in Christianity. Although the ceremony differs between Anglican, Catholic, and Orthodox denominations, holy water is used to welcome men, women, and children into the religion.

Although several sources claim that holy water has been used in its current form since 400A.D., there are similarities with longstanding Jewish traditions. The aspect of ritual cleansing has been a part of the Jewish canon of law and ethics since before Christianity ever existed.

The Encyclopedia Britannica describes the origins of Holy water and its significance:

“In the early Christian community the “living” water of rivers and streams was preferred for Baptism and apparently received no special blessing. By the time of the 4th century the still waters of the baptismal font or pool were exorcised and blessed with the sign of the cross. Other water was blessed for the use of the faithful as a means of warding off the unclean spirit and as a safeguard against sickness and disease. In the course of time, this blessed, or holy, water was used as a reminder of Baptism by the faithful on entering the church and by the celebrant in sprinkling the congregation before the Sunday mass.”

It’s Importance for the Body and the Soul

In the Book of Leviticus, which forms a part of the Christian Holy texts, it prescribed a number of varied ritual purifications using water to remove the “uncleanness” associated with coming into contact with a dead body, menstruation, or childbirth. A dual purpose for cleansing is also highlighted, this time focusing on priests and worshippers. A person would also be asked to purify himself with water before entering a Temple precincts, offering prayer and sacrifice.

The difference between Anglican and Catholic practices is the amount of holy water used. In the former, water is usually sprinkled over a baby’s head. In Catholicism (and in the Orthodox church), holy water is used more frequently.

In the Catholic Faith, Holy Water is the water that has been blessed by a priest or bishop. It is a symbol of the sacrament of baptism. Catholic churches typically keep some in a baptistery font and in a stoup or a smaller font found near the entrance of the church. It is common for Roman Catholics to dip their fingers in the stoup and bless themselves with the holy water as they enter the church. Aside from this, there are many other uses for Holy Water.

In the Oriental Orthodox church, Holy water is used to bless many things, besides people. In Russia for example, it is not uncommon for an Orthodox priest to be seen blessing new navy ships, tanks or even space rockets.

As we see, the significance of Holy water is strong across all Christian denominations; however, how it is used is much more different.