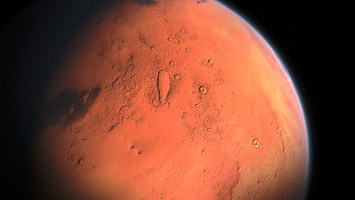 Scientists and sci-fi fans have long dreamt of finding life on other planets. For years, Mars has been the main focus of the search for extra-terrestrial life and a number of probes and robotic explorers have been sent to the Red Planet in the hope of finding something new. Recently, all that hard work paid off when a huge underground lake was detected on the planet. The largest body of water ever discovered on Mars, could this be the clue to the alien life we’ve all been searching for?

What has been found on Mars?

Earlier this year, researchers detected a possible reservoir with the Mars Express Orbiter, a European spacecraft that’s been orbiting Mars since 2003. While they were scanning the ice cap at Mars’ south pole, MARSIS, the probe’s radar instrument, detected a feature about a mile underneath the surface that was about 12.4 miles wide.

This feature had the measurements the team would expect from a liquid lake. However, as @verge says, “Today’s finding is only based on radar measurements, which means it’ll be difficult to confirm unless we send more sophisticated instruments to Mars in the future or if we actually drill into the ice.” So until scientists are able to see the ice with their own eyes, we won’t know exactly what it is lurking underneath the planet’s surface.

Because the liquid is thought to be salty and in contact with rocks, scientists believe it increases the chances that life could be lying in wait under the surface of Mars. Although there’s no way to know for sure what’s growing up on the Red Planet, this new discovery has got scientists everywhere incredibly excited about the possibility of finding life on Mars.

Even if it turns out the Red Planet is packed with clean H2O, it will still be a long time before humans see this space water with their own eyes and even longer until we’re able to make use of it. Until then, we’ll have to keep searching for signs of life and keep our eyes peeled for any extraterrestrials emerging from the Red Planet. Until that happens, we’ll just have to make do with the life, and the water, we have here on Earth.