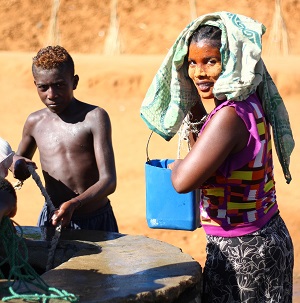 More than 70% of Earth’s surface is covered in water, with the oceans holding about 96% of all Earth’s water. Unfortunately, our oceans and water sources are suffering. Pollution, in the form of microplastics and mercury, is destroying ecosystems and contaminating marine food sources. The burning of fossil fuels has caused acidification, and several drinking water sources are contaminated. Access to safe drinking water should be available to everyone, but it is a sad fact that many countries have only limited clean water drinking, cooking and sanitation. This is particularly true of developing countries, where scarcity and contamination make water supplies uneven and difficult to access.

People are passionate about water; some individuals are really trying to make a difference. Canadian water activist, 13-year-old Autumn Peltier, was invited to speak to the United Nations in spring 2018. The teenager has become globally recognised as a promoter of water protection. Autumn first began campaigning to protect Canadian waters when she was 8 years old. She began speaking at local events after being inspired by her aunt, who was also a campaigner for conservation and water rights.

“I noticed that many individuals are completely unaware or misinformed about the lack of clean, fresh water in many parts of the world. This is largely due to the fact that these individuals have what seems to be unlimited access to water. They are not exposed to the daily challenges that millions around the world are suffering with simply because it is often not represented on the news, in their social feeds, or in their local vicinity.”

Celebrities Trying to make a Difference

The rich and famous are using their celebrity status to raise awareness and promote safe water and sanitation. Movie star Matt Damon is co-founder and ambassador of the charity water.org, an organisation that helps families in developing countries build clean water and sanitation systems. He also plans to pitch US President Donald Trump on clean water issues.

Kristen Bell raised almost $70,000 on her 30th birthday and donated the proceeds to a water charity. The following year, Kristen narrated “Water changes everything”, an animated video about WASH (Water, Sanitation, Hygiene). She has also supported other water projects to raise awareness.

Rapper Jay-Z was concerned by the number of people who lack clean safe water. He decided to act, launching a water campaign in league with the United Nations. The documentary “Diary of Jay-Z: Water for Life” follows two visits to Africa, where he experiences the daily struggle of people with lack of clean water and sanitation. In 2007, Jay-Z won an award for his documentary and campaign, with former UN Secretary General Ban-Ki Moon accepting the award on his behalf.