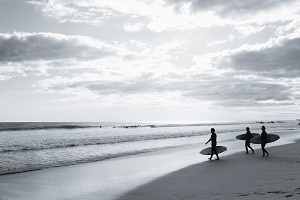 The word “tide” is what we use to describe the rising and falling of sea levels. There are different types of tides, but all are caused by the gravitational pull of the Moon and Sun and the rotation of the Earth. The Moon has the biggest influence on our tides. Its gravitational pull on Earth is so strong that it tugs at our oceans, causing them to bulge on the side which is facing the Moon. This results in high tides on one side and low tides on the other.

There are several different tidal phenomena on earth. The highest tide is the spring tide which happens twice a month, during a full and new moon. The spring tide is caused by the Earth, the Moon and the sun falling in a straight line, creating a very strong gravitational pull. This is also when people usually notice the biggest difference between high and low tides. The low tide is also known as neap tide, and occurs when the Moon is facing the Earth at a right angle to the sun.

Riptides are the strongest current of water, which flow seaward from the shore. It can flow as fast as 8 feet per second, faster than any human can swim. These tides can occur at any beach, ocean, sea, and large lake with breaking waves.

Tidal energy is also referred to as hydropower and may be the future of electricity. Hydropower is a relatively new idea.

“During the 20th century, engineers developed ways to use tidal movement to generate electricity in areas where there is a significant tidal range—the difference in area between high tide and low tide. All methods use special generators to convert tidal energy into electricity. Tidal energy production is still in its infancy. The amount of power produced so far has been small. There are very few commercial-sized tidal power plants operating in the world.”

There are a couple of different ways of generating tidal energy. Tidal stream generators let the water turn the generator as the tide moves in and out. They work in a similar fashion to wind turbines on land, in that fast moving fluid (or air) flows through the generator, transforming it into electricity.

Another method is to create tidal lagoons or barrages, partially shut off from the ocean by a barrier. The trapped water is captured at high tide and then released during low tide. The released water turns a turbine and is a useful way of creating hydroelectricity.