The most Polluted Places on Earth 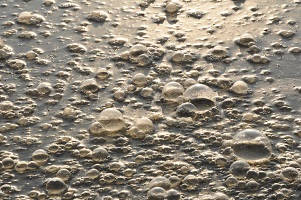 Water pollution has a huge impact on human, animal and plant life. Via rivers, we dump an estimated four million tons of microplastics into the ocean every year. Waterways are contaminated with microplastics, as well as chemicals, raw sewage and rubbish. It is thought that 80% of marine pollution comes from land. Some rivers are more polluted with others, but in combination account for 95% of all microplastics found in the world’s oceans.

Top 5 Most polluted Waters in the World

1. The Citarum River is in West Java, Indonesia. It is estimated that 20,000 tons of waste and 340,000 tons of wastewater is dumped into the river every day. The Citarum is so contaminated that you can’t actually see the water – it is completely covered in rubbish and dead animals floating on its surface. Water samples show it to have a high toxic contamination of lead, aluminium, magnesium and iron. Despite excessive pollution, over 25 million people rely on it as their main water source.

2. Yamuna River, India. The second largest river in the Ganges, it stretches 1,376km. It is thought that 60% of Delhi’s waste gets dumped in the river, including untreated sewage and industrial and domestic waste.

According to a report in 2015: “The Yamuna, by the time it flows through Agra, has nearly 50 times more biochemical oxygen demand (BOD) than the permissible limit. The Central Water Commission (CWC) has declared that the river water at Agra is safe neither for irrigation nor for domestic use. Water in the river, now polluted beyond repair, an official said, is also contaminating groundwater.”

3. Vrishabhavathi River, also known as the Vati River, located in Vapi, India. This river was once a main drinking water source for the local people, but now it is polluted with waste dumped by factories as well as domestic and agricultural waste. The mercury in the Vati’s water is 96 times higher than considered safe.

4. The Great Pacific Garbage Patch. This is a floating island of rubbish which spans across an area of ocean in the North Pacific, between California and Hawaii. The trash patch stretches 617,762 square miles. To put that into context – this is twice the size of the state of Texas, three times the size of France. The debris was first discovered in the 1980s, and is held together by North Pacific currents. The island is mostly made up of plastics and weighs more than 43,000 cars.

5. The River Tame, UK. This river in Northern England has been dubbed the worst polluted river in the world for microplastics. In a study, researchers discovered that the water contained the highest levels of plastics recorded: 517,000 particles per m2. These levels are much greater than samples which were taken from other rivers that are in heavily built up areas, such as Hong Kong.