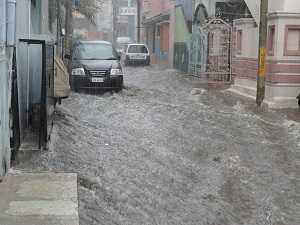 The force of nature is both incredible and terrifying. When it is unleashed on the world its effects can be catastrophic. Floods in particular are devastating to humans and animals, as well as agriculture. It can take a long time for communities to recover in the aftermath of a flood. As climate change continues to wreak havoc, rising sea levels and extreme weather conditions are combining to increase flood risk.

China 1975 – The Banqiao Dam (Ru River). In August 1975, the region suffered a year’s worth of rainfall within 24 hours during Typhoon Nina. The Banqiao Dam broke under the strain, and the subsequent flood cost between 90,000 to 230,000 lives. Many of the deaths occured after the flood, as a result of water-related diseases.

China 1954 – The Yangtze River. The Yangtze River floods occurred from June to September 1954. That year there was an unusual amount of rainfall and the rainy season went on longer than normal. The Yangtze reached record high levels, of 44.67m. The number of lives claimed by this flood is estimated at 33,000, including those who died of plague in the months after the disaster.

Bangladesh 1974 – Monsoon. Catastrophic flooding occurred in Bangladesh during the monsoon season, destroying much of the annual rice crops. This caused a widespread famine, and an estimated 29,000 people lost their lives.

Venezuela 1999 – Mudslide. The Vargas tragedy occurred on the 15th December when heavy rain and flash floods hit the north central coast of Venezuela. The mudslides stripped rock and sediment from the mountainside, sending it crashing towards the sea. It destroyed hundreds of homes and took the lives of an estimated 40,000 people.

India 2005 –  Monsoon. Torrential rains during the monsoon in Mumbai saw 94cm fall in one day. The rain caused mudslides which cut off communities and turned roads into rapid flowing rivers. An estimated 700 people lost their lives.

USA 2005 – Hurricane. The hurricane season of 2005 produced several deadly storms which battered the USA, Caribbean and South America. One of the worst storms was Hurricane Katrina, a category 5 storm. On August 29th Katrina slammed into the US causing millions of dollars worth of damage, changing the face of New Orleans forever when 80% of the city was submerged in flood water.  The death toll is estimated at 2,000.

Katrina still holds out as one of the deadliest hurricanes in US history. Live Science explains, “The National Guard was called in to help with evacuations. Thousands sought refuge in the New Orleans Convention Centre and the Superdome, which were overwhelmed. It was one of the largest displacements of a population since the Great Depression, according to the NOAA. According to The Data Centre, an independent research organization in New Orleans, the storm displaced more than 1 million people in the Gulf Coast region.”

USA and Caribbean 2017 – Hurricanes. A series of category 5 hurricanes developed in the Atlantic during August and September 2017. After a 10-year lull, 3 deadly hurricanes hit the US and Caribbean in short succession. Hurricane Harvey was to hit first on August 25th, flooding Houston. Irma was next, battering Caribbean islands before reaching Florida on September 10th. Hurricane Maria made landfall on September 20th, devastating Puerto Rico. The storms caused over $200 billion in damage and an estimated 2,000 lost their lives.