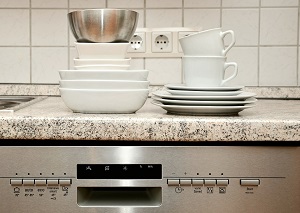 Such is the pressure on resources and the environment, many of us are trying to find ways of saving water. This is especially true of those with a metered water connection, knowing that a large bill is waiting if they don’t reduce their usage. As a result, we’re often asked the question of whether it’s best to use a dishwasher, or wash up by hand.

We usually recommend installing a filter as a good first step. Filters for kitchen taps and the dishwasher water supply can save you money and lessen your environmental impact.

In critical studies conducted by the University of Bonn in 2009, it was shown that the dishwasher uses only half the energy, one-sixth of the water, and even less soap than handwashing. This was a study conducted with 50 or so participants, so it looks like the dishwasher wins out when it comes to being kinder on the environment.

As the guys over at Finish say:

“A dishwasher used to be thought of as a luxury household item, rather than a time-saving necessity. While the cost of the average unit has come down in recent years (starting at around £200-£250), people still think they’re expensive to run. The fact is, modern models use minimal amounts of water and energy so their cost per wash is much less than people think – around 40p including water, energy and detergents to wash a full load of 12 place settings.”

In terms of budgeting, using a dishwasher is proven to be be significantly cheaper than running the tap while washing up. However, this is only true if the dishwasher is fully loaded each time, as Sophie Christie writes in The Daily Telegraph.

Hand washing, although superseded by the ease of the dishwasher, is often considered the preferred method of getting those dishes squeaky clean. In a survey conducted by Houzz in Russia, Italy, Spain, France, Japan, the US, the UK, and Australia, 30% to 40% of respondents still prefer the hand washing method.

The act of washing up by hand is thought to use less water, and so is better for the environment. In fact, the exact opposite is true. Many of us actually use far more water than is necessary to wash a few plates or pieces of cutlery. This increases our carbon footprint and has the potential to rack up larger water bills.

We would highly recommend a dishwasher, fitted with a filter. Make sure that the both the dishwasher and filter are of a high quality too. Cheaper items will only waste precious water in the long run, defeating the point of fitting it all in the first place.

According to uswitch, people in the UK are seeing the benefits of dishwashers more and more, and the amount of households that now own a dishwasher has increased dramatically over the past 10 years.