Water Pollution: How it Affects our Wildlife 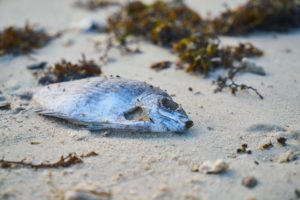 Most of us are aware of the destructive effect that pollution has on the environment. Human activities are contaminating the world’s water, most notably our use of microplastics and toxic chemicals, both of which are finding their way into water systems.

Oceans are the largest bodies of water on earth. Ocean pollution is having a devastating effect on marine animals and plant life. Harmful substances such as industrial waste, oil and chemical particles have been entering the oceans for years and are continuing to do so.

Pollution in the oceans is causing a reduction in oxygen levels, leading to plant life decay. This is turn is damaging sea water quality, leading to broader impacts for all life in the ocean.

The National Geographic mentions this:

“Many ocean pollutants are released into the environment far upstream from coastlines. Nitrogen-rich fertilizers applied by farmers inland, for example, end up in local streams, rivers, and groundwater and are eventually deposited in estuaries, bays, and deltas. These excess nutrients can spawn massive blooms of algae that rob the water of oxygen, leaving areas where little or no marine life can exist.”

Most of the debris and pollution found in the oceans, rivers, lakes and on beaches comes from land-based sources. Sewage runoff can cause microbial contamination of water, which wildlife drink or live in. Seabirds such as gulls are at the top of the food chain, so they absorb all the toxins and pollutants contained in the fish they eat. Bio-accumulative pollutants build up in biological tissue. These can be passed down in eggs, or milk in the case of mammals. The insecticide DDT was banned for agricultural use because it thins the eggshells of birds.

Pollution is causing pH levels to change in the water, killing aquatic plants which can’t survive in acidic conditions. Chemical pollutants build up in water and plants absorb them. Marine debris that accumulates in water builds up near the surface, blocking out sunlight that plants need for energy. The lack of light will prevent plants from creating glucose, which stunts their growth.

Nutrient pollution can cause dead zones. These are areas in water where there is little or no oxygen, creating spots where aquatic life can’t survive. Algal blooms can create toxins that kill fish and other animals. Even if the blooms are not toxic, they can still harm aquatic life by obstructing sunlight and blocking fish gills.

What can we do?

There are some things that we can do as individuals to help reduce water pollution.