The War Against Plastic: The Great Pacific Garbage Patch 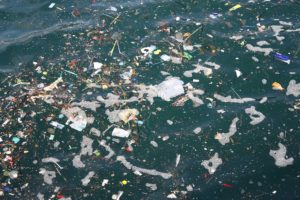 The problem of plastic build-up in our oceans has grown more severe over the years. The most notable and visible example of humanity’s need to change is the Great Pacific Garbage Patch, an area choked with chemical sludge and over 1.7 trillion pieces of plastic. Formed as a result of an ocean gyre or vortex, it’s located in a spot between Hawaii and California and covers an area of approximately 1.6 million square kilometres. This state of affairs cannot continue, which is why there’s an effort being made to destroy the Great Pacific Garbage Patch.

A machine has been designed to try and remove tons of plastic from the Patch. Dutch inventor Boyan Slat came up with a version of the idea in his teens, and with the help of non-profit company The Ocean Cleanup, it’s become reality. The design calls for a linked, snake-like tube made up of 40 foot pipes. Below the pipes, a solid mesh of nylon screens will act as a dustpan to collect large chunks of plastic and remove them from the water. The Ocean Cleanup eventually aim to have 60 of these constructs in the ocean, working to remove debris. A boat will need to visit each set of tubes once every 6 to 8 weeks, to pick up the collected plastic. The inventor, @BoyanSlat, said:

“The plastic pollution problem has always been portrayed as something insolvable. The story has always been ‘OK, we can’t clean it up – the best we can do is not make it worse’. To me that’s a very uninspiring message. What I really hope is that the ocean clean-up in this century can be a symbol for us using technology to make things better. We as a humanity created this problem, so I think it’s our responsibility also to help solve it. Most of the plastic is still large, which means that in the next few decades if we don’t get it out, the amount of microplastics can be tenfold or 100-fold. It’s this problem that’s waiting out there to magnify many times unless we take it out.”

The last issue Slat mentions is a serious one – and his contraption for cleaning up the Great Pacific Garbage Patch can’t filter out microplastics. This means that we need another solution for this new challenge.

If Slat’s type of solution fails to remove the problem of ocean plastics quickly enough, the issue of microplastic contamination will become even more concerning. Worse still, several studies claim that fishing plastic out of the ocean does not actually solve this problem in any meaningful way. This paper notes that any proper reduction in microplastics reaching the ocean will need to happen earlier – that the key is prevention, not removal.

Dr. Denise Hardesty, of CSIRO, did not sugar-coat the problem:

“Plastic is everywhere, all of the time. It is in the air, the wind, the water and the soil and we find it in as many places as we look.”

Ultimately, the removal of plastics from our oceans is going to take a concerted, scientific effort. Fortunately, there are schemes like Boyan Slat’s which could prevent major catastrophes in the future.