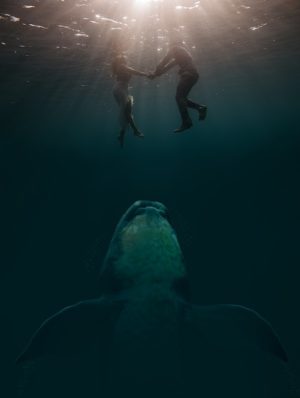 Few people regularly swim in British rivers. Generally speaking, the water temperature is too cold for large parts of the year. However, watching Jeremy Wade’s programme River Monsters might put you off taking a dip for good, our rivers appear to be home to some rather scary creatures.

The best known British river monster is probably the pike. This ugly fish can grow up to 155cm in length, and has a mouth full of razor-sharp teeth. The pike is five million years old, and has evolved to ambush its prey by detecting vibrations in the water. They feed on fish, ducklings, grass snakes, mice and frogs.

In a 2015 article, The Guardian’s Patrick Barkham wrote of an encounter with a pike, explaining that it had shredded his armour-clad fisherman’s gloves completely.

One of the world’s oldest vertebrates, the lamprey disappeared from British rivers in the 1800s. However, they’re now returning to our waters and they don’t seem to have changed a bit. Lampreys possess long, eel-like bodies and a circle of vicious teeth instead of jaws. They can grow up to a metre long. However, they’re unlikely to attack humans unless starving hungry.

David Attenborough has presented us with many catfish over the years, but none quite like the river monster caught by Essex schoolboy Will Sutton in 2014. Early one morning while fishing in Norfolk, he managed to catch the largest catfish ever found in the UK. The gigantic beast weighed 122lbs and was 7 feet long.

In an interview with the Express newspaper, Mike Heylin, chair of the BRFC sounded impressed.

“We don’t keep records of catfish catches any more, but at 122lbs Will’s catfish catch is five or six pounds heavier than the next biggest catfish,” he said. Adding, “It is highly likely it is the biggest fish in Britain.”

Nessie needs no introduction, but she’s certainly worth a mention. This Scottish monster has been a part of folklore for thousands of years. When a hoax photo was released in 1934 that purported to show the creature, it fooled people around the world. Despite being conclusively disproved, millions of people believe the story to be true.

Roland Watson, author of Waterhorses of Loch Ness writes: “I believe in a large, unidentified creature in the loch, possibly amphibious – that is, a fish that goes on land.” He was quoted in an interview with The Guardian while attending the anniversary of the ‘first modern sighting’ of Nessie at the Edinburgh Science Festival.

If you do decide to refresh yourself this summer in one of Britain’s rivers or waterways, you should be on the lookout for all sorts of mysteries lurking in the mud.