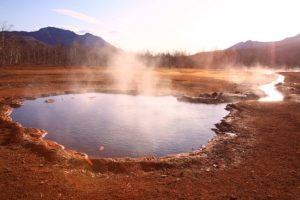 Bathhouses have been synonymous with British culture since they were discovered in England more than 2,000 years ago. That culture has become a heritage, and people can visit spa towns across the country to enjoy thermal and mineral springs. Water from these springs is full of minerals with cleaning and hydrating properties, such as sulphate, calcium, sodium, magnesium and iron.

It’s not all about looking and feeling your best. Hot springs are a great place to enjoy a slice of history and beautiful sights while on holiday.

What exactly are thermal springs?

Hot springs occur when water from deep in the ground rises into gravel deposits. Often, they appear as a lake-like spring. Roman baths, which are the best way to enjoy a true hot spring in the UK, are equipped with historical funnel systems that draw water averaging 35°C into a stone pool.

If you have a penchant for Countryfile, you’ll have heard of Bath’s hot springs. They’re perhaps the only true hot springs in the country, and receive thousands of visitors from all over the world every year.

The largest hot spring in Bath is King’s Spring. It rises in the Roman Bath Museum in the city centre. When it first escapes the ground it is around 45°C, then cools to a more comfortable 35°C, similar to a hot bath you might run at home. The bath was built in the 12th century and retains many of its original features, including a statue of King Bladud, the mythical founder of the City of Bath.

The Hetling Spring is a somewhat recent addition. Its restoration was completed in 2006, saving more than one million litres of mineral-rich water from seeping into the Avon River. Rainwater that collects in the Avon Valley trickles through the ground before reaching the city, and contains more than 42 minerals. The temperature of the water is 33.5°C.

As the only open-air hot spring in Bath, the Cross Bath offers a unique experience. It’s a sacred Celtic site and the nourishing water emerges from a stone foundation. It is also much smaller than the King’s Spring or Hetling Spring, making it a quieter place to bathe.

In the 19th century, Buxton was one of the leading spa towns in the UK, perhaps second only to Bath itself. However, its status was diminished by the neglect of Buxton Crescent, a classic piece of 18th century architecture that houses a thermal spring. Today, the people of the city are pushing plans for the renovation of the Crescent and its springs.

Buxton Crescent isn’t the only site in Derbyshire that fell into disrepair over time. Nestled in the picturesque Peak District is Stoney Middleton, a small village that’s home to a Roman bathhouse awaiting restoration. The building itself was Grade II listed and repaired with support from the Peak District National Park in 1986. However, it’s still awaiting development for public use. The water runs cooler than that of Bath and Buxton, at just 18°C.