How the ancients bathed 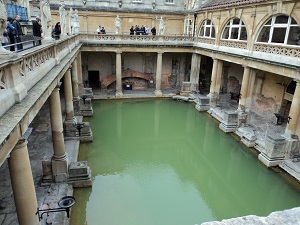 Although we often think of certain centuries in the past as being a dirty times to live, the ancient world was actually very concerned with hygiene and cleanliness. The Ancient Greeks, Persians and Romans all paid great attention to the concepts of water purification and bathing. The citizens of Ancient Rome relished a good bath, and their bathtime achievements are still seen today. The city of Bath is actually named after the grand Roman baths built there, a firm testament to Roman engineering.

The villas of wealthy Roman elites were fitted with baths and ablutions areas. However, bathing was still an important ritual for the poor. In large cities like Rome, public baths were a place to clean yourself as well as socialise.

In the Roman bath houses, men and women did not bathe together. It was considered inappropriate, so each had their own designated time for attending the bath house. For example, men might wash in the afternoon and women in the morning.

The rituals involved in bathing were luxurious. Romans were attentive to their hygiene, so visits to bathhouses were thorough. Visitors would change out of their clothes on arrival. Although little is actually known about what they wore while bathing, it’s generally agreed they wore a light covering and special sandals with thick soles.

After this, oil would be applied all over the body and some routine exercises would begin. The exercise would take place in the large courtyard in the center of the bath house called the palaestra. Exercises would include weight lifting, running, swimming and ball playing.

Once exercise was finished, the oil that would be removed (scraped off) with a metal instrument. Finally, bathing would begin. It was a process, requiring people to walk through a series of rooms that varied dramatically in temperature. These rooms included hot ones, with underfloor heating. This was a sultry heat which would make the bather sweat. Once done, they would move to a cold room, with cold water baths.

More than a bath

These public bathhouses were more than a place just to bathe. Artistically, they were quite grand and complex in structure, as Mark Cartwright explains in Ancient History Encyclopedia:

“Baths for bathing and relaxing were a common feature of Roman cities throughout the empire. The often huge bath complexes included a wide diversity of rooms offering different temperatures and facilities such as swimming pools and places to read, relax, and socialise. Roman baths, with their need for large open spaces, were also important drivers in the evolution of architecture offering the first dome structures in Classical architecture.”

The ancients, as it turns out, were better at cleaning up than modern day people.