The world’s most complex water systems 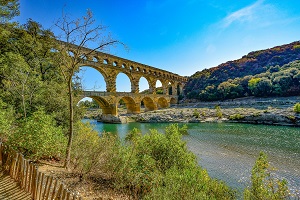 From contemporary water gadgets to ancient water wells, our desire to create better, healthier sources of water is a continuing source of innovation. Human civilisations have been defined by their access to water, and their grand monuments are matched by complex water systems.

In this post, we explore those that have pushed the boundaries of human invention, and in the process allowed millions of people to access clean and fresh water.

The Ancient Roman aqueducts are still a marvel of technology today. As Andrew Wilson writes:

“Roman mastery of hydraulic engineering, and in particular of long-distance aqueduct supply systems, enabled the growth of a distinctive urban culture characterised by public bathing and lavish water display in both public and private settings. In the rural sphere, the extension of empire around the Mediterranean facilitated, among other things, the transfer of irrigation technologies between regions of different cultural and geological backgrounds.”

Many of the aqueducts built by the Romans are still standing today. The most well preserved example is in France, and is known as the Pont du Gard. Standing at 48.8 metres high, this bridge is part of an aqueduct that stretches 50km and crosses the Gardon River.

The largest aqueduct in the world, the Thirlmere aqueduct remains proud example of British engineering. Built between 1890 and 1925 in North West England, it is 96 miles long and runs through the English countryside.

As one of the largest cities in the world, New York is home to the second biggest water system. For NYC’s millions of residents, the water system needs to cater to a variety of complex living arrangements. It has a storage capacity of 550 billion gallons and provides 1.2 gallons of fresh water every day.

The New York water system is composed of three aqueducts and three tunnels. Each of the three aqueducts serves as reservoirs and the tunnels serve as the distribution system. This means much of the water is moved by gravity alone.

The last great city of the Hindu empire, Hampi had one of the most sophisticated systems of aqueducts and canals of the era. The city was home to a bevy of wealthy princes and clans, and its water system reflected their power and prestige. At its peak, Hampi’s water system supplied thousands of residents with fresh drinking water.

The site of the aqueduct is crisscrossed with a network of irrigation canals. These were used to bring water from the Tungabhadra River to fill the tanks and baths. As water plays an integral role in Hindu worship, the water for the many temples was supplied by underground aqueducts.