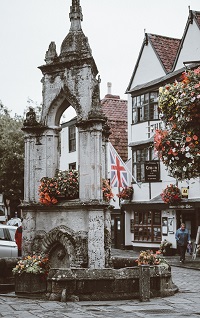 A familiar sight in many of Britain’s picturesque villages, the water well was once a focal point for those who lived there. It was only in the 20th century that the village well became a thing of the past. As towns and villages across the UK began to install indoor plumbing and water systems, first pioneered in the Victorian age, there was no need to visit the well.

At TSW we have written about the history of the water well before:

“Water wells have a long history, dating back around 8,000 years. A well is an excavation or a structure which is created by digging or drilling a hole into the ground to reach water in underground aquifers. The water can then be drawn up by either a pump or bucket, raised mechanically or by hand.”

During the Neolithic period, ancient Britons realised that a fresh water supply was essential. Wells appeared around this time, and over the years more sophisticated and elaborate constructions were experimented with. The village of Wells in Somerset is home to a prominent example.

Later, the Romans would bring a well system to the UK that the British would use for centuries. It was still in use in the early 20th century, although generally only in villages without indoor plumbing.

The British Geological Survey has painstakingly recorded all the water wells across the UK in the National Well Record Archive. It is a collection of over 105,000 records of springs, water wells and water boreholes in England, Wales and Scotland.

Some of Britain’s wells have become internationally renowned for the skills and expertise involved in the their creation. A good example is the Woodingdean well in Sussex, the world’s deepest hand-dug well. Work began in 1858, undertaken by Brighton’s Guardians. Although it went on to set a world record, the reason for its tremendous depth was down to it being cost-effective. A matter of great pride for Brightonians, the Woodingdean well is a perfect example of masterful engineering.

A slice of history and spirituality

A number of Britain’s wells have been the focus of religious and spiritual pilgrimages, especially during the Medieval era. However, the spiritual aspects date back to pagan times, especially Celtic paganism. During the Middle Ages, the well of St Winifred at Holywell in North Wales was one of the most important pilgrimage centres in England and Wales.

Today, most of Britain’s historic wells have lost their spiritual attraction. However, they still act as fascinating examples of how societies kept people healthy with fresh water.