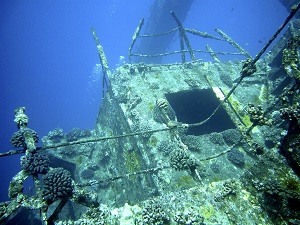 You may be surprised to hear that there are many water related museums across the world. From watermill museums to underwater sculpture galleries, in this post we will look at the very best of museums dedicated and influenced by water.

Located off the coast of St Georges, Grenada, this stunning sculpture park is set in the beautiful Caribbean Sea. The sculptures were created by British artist, Jason deCaires Taylor. The unique underwater park was first opened for public viewing in May 2006. The human sculptures form human shapes, and consist of solitary standing figures to a circle of children holding hands. Puregrenada.com explain:

“As artificial reefs, these sculptures are proving highly successful so far in attracting a stunning array of varied marine life. In doing so and attracting visitors, they have indeed fulfilled a role in easing the environmental pressure on other reefs in the locality. A key aspect to the sculptures’ appeal has been the dynamic changes brought about by being exposed to the power of the ocean. Unique natural forces including sea surge, wave action and currents have imposed their own influence and changes on the sculptures.”

Set around the Florida Keys, there are almost a dozen shipwrecks in the area, some of which have been there for almost three centuries. The oldest shipwreck is the San Pedro, a Dutch built ship which ran into a hurricane in July 1733. The wreck was discovered in the 1960’s in Hawk Channel. Treasures of silver coins were found which dated back to 1731. Divers and snorkelers who embark on the Shipwreck Trail can explore the San Pedro and many other shipwrecks in this fascinating underwater museum.

This masterpiece was originally created to help repair the coral reef after being damaged off the coast of Cancun, Mexico. The Subacuatico is an artificial habitat where marine life now lives and thrives. The site is home to over 470 underwater statues and is one of Mexico’s most visited tourist attractions. Visitors to the underwater museum are taken on snorkeling excursions, where they can see the famous Man on Fire, The Promise and Dream Collector, as well as seeing the thriving marine life in the area.

This non-profit, charity museum is described as an ‘independent working museum’. The Waterworks Museum was first established back in 1974, and educates visitors on the history of drinking water, steam and pumps. The museum is close to the River Wye and welcomes both adults and children alike. The waterworks are over a century old, and the pumphouse originates back to 1856. The Waterworks Museum are very proud of their history, stating:

“The museum traces the history of drinking water from the cave-dwellers up to the present day through wonderful working engines, superb display panels, guidebooks and films and the knowledge shared by the Museum’s volunteers. Classified by English Heritage as ‘a site of clear national importance’, the Museum is home to the oldest working triple-expansion steam engine in the UK and probably has the widest range of working pumps and engines.”