The deep blue: the ocean’s most unusual inhabitants 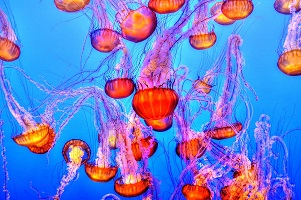 The sea is home to countless species of marine life and ecosystems. Some are familiar to us, yet everyday there are new and wonderous species being discovered. As technology improves, we are able to delve deeper and deeper into the oceans and discover exotic creatures.

In this post, TSW takes a look at five of the magnificent specimens found in the furthest depths of the ocean. Colourful, beautiful and at times frightening, get acquainted with some of the world’s most unusual sea creatures.

A familiar sight to many interested in the oceans, the clownfish is a pretty little reef dweller, spending its time nestled between the stinging tentacles of anemones. As National Geographic describe:

“Bound in an alliance of mutual benefit, clownfish spend their entire lives with their host anemones, rarely straying more than a few yards from them.”

Another colourful creature, the bizarre flamingo tongue snail is located in the waters of the Atlantic and Caribbean. Feeding on toxic sea fans, the snail absorbs the venom thus becoming toxic itself in the process. Its brightly coloured shell is made up of the mollusc’s living mantle tissue.

One of the most menacing and downright ugly fish on our list, the fangtooth is in fact a gentle creature. Benign mainly because of its poor eyesight, the fangtooth literally has to have its prey bump into it. It is only then that this hideous fish uses its huge teeth.

Its eerily humanoid features and prehistoric shape give the hatchetfish its creepy appearance. Discovered in the waters of South and Central America, the hatchetfish has a glowing body, due to its deep and dark natural habitat. This makes it very popular among hobbyists. This video from Epic Wildlife gives a great rundown of the nightmarish yet completely harmless creature.

These great creatures all have a purpose, and it is important that we protect them. Recently, we spoke about the devastating effects humans are having on marine life:

“The world’s oceans are in trouble, nearly 50% of all marine life with vertebrae have declined in the last 40 years, according to a report by the World Wildlife Fund (WWF). To add to that, almost a third of the world’s fish stocks are being overfished, and three quarters of reefs are under threat by global warming resulting in coral bleaching.”

We all have a duty to protect nature and wildlife. If we fail to act, some or all of these species may disappear forever.