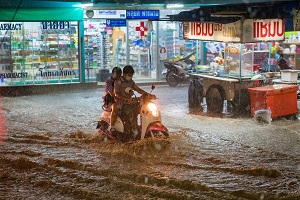 The world water supply is slowly running out. In 2017, one person in five has no access to clean, safe water to drink. This year the world has experienced a lot of natural disasters and extreme weather events. There has been a severe drought in Somalia, flooding in Jakarta and a steady stream of hurricanes battering Florida and parts of the Caribbean. In Southern Italy, there has also been water rationing due to a scorching hot summer with temperatures in reaching over 40°C and very little rainfall.

Every August, researchers from across the globe meet in Stockholm, Sweden for World Water Week.

The human race is changing the environment, we are making dry areas drier and precipitation more inconstant and extreme. Climate change is slowly warming our planet.

Clouds are moving away from the equator towards the poles due to the Hadley Cell Expansion. This is a global scale, tropical atmospheric circulation that features air rising close to the equator, flowing poleward, descending in the subtropics, then returning towards the equator near the surface. It’s a phenomenon caused by global warming. The Hadley Cell Expansion deprives equatorial areas, like the Middle East and Central America, of rain water.

It was found that the populations most expected to be affected by flooding are India, Bangladesh, China, Vietnam, and Indonesia. Increasing precipitation and communities living near rivers and streams have a high risk of experiencing flooding. Currently around 21 million people are at risk from river flooding worldwide. This could increase to 54 million by 2030. During this summer, extreme flooding affected 5.7 million citizens in Bangladesh with 115 people losing their lives.

30% of the earth’s fresh water lies deep below ground inside aquifers, and water is being extracted daily for drinking and farming. It is being taken at such rates that the water has no time to replenish. Our water infrastructure is in a state of disrepair, and as much as 6 billion gallons of water is being lost in the US through leaking pipes alone.

“Numerous responses have been put forward to meet the ever-increasing demand for water. In some cases, the response focuses on how to compensate for the natural variability in the hydrological cycle in order to provide a continuously available resource. In other circumstances, the response focuses on overcoming the reduced availability in water quantity or quality that results from human and development impacts, from a demand management perspective.”