The art of water 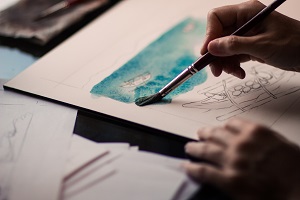 From Monet to Turner, artists have spent centuries trying to capture the bewitching gleam of a sunlit sea or a charming river. In this post we look at some of those famous paintings where artists have rendered the sublime and, at times, catastrophic nature of water on canvas.

Regarded as one of the most recognisable paintings of water, Claude Monet’s The Water Lily Pond is a masterpiece of Impressionism. Housed in the Metropolitan Museum of Art since 1929, the water lily series shows how Monet was able to bring the eclectic nature of water to life with his contrasting brush strokes, capturing its serene and tranquil nature.

2. The Monk by the Sea by Caspar David Friedrich

“A black ocean extends immeasurably before him, opening like an abyss without comforting pictorial borders. The German romantic Caspar David Friedrich spent two years working on this alarming vision of a sea of darkness, with only the slightest hope in the hint of blue sky above the leaden clouds. The monk stands between the two sins against hope: presumption and despair. This is a sea of faith.”

3. The Great Wave by Hokusai

Painted in 1831, this is one of the most famous Japanese paintings in the world. Hokusai took a dramatic look at water, articulating the frightening and untamed nature of the sea. The juxtaposition of a grey sky and intense blue waves creates a sense of fear and shows the wild and irascible nature of water. Moreover he shows just how little control humans have over it.

4. The Raft of the Medusa by Théodore Géricault

A master of Romanticism and Realism, Théodore Géricault’s stunning vision is infused with drama and tragedy. Like Hokusai, he showed us the unpredictable and often devastating effects water can have. In the painting, we see the survivors (and some victims) of a shipwreck, as unforgiving waves crash around them, painted in the Romantic style with a ground-breaking use of swirls and chiaroscuro.

Turner was one of the world’s foremost painters of water, able to capture both the gentle and the tumultuous. This painting from 1838 is a perfect display of the peaceful nature of water, when man and the sea work in harmony together. We see a gigantic ship making its way to be dismantled, but also other ships in the background. This is the perfect portrayal of how technological advancements are aided by water.

Art and water in crises

Today, artists are still inspired by water, just as the old masters were. However, as we face mounting problems with global warming, especially the prospect of water shortages and the current destruction of marine life, it’s important for artists to take on the role of activist. As the world slowly wakes up to the very real and increasing danger of water shortages, it’s up to artists to look to water for inspiration, making people aware of this looming crisis in the most creative way they can.