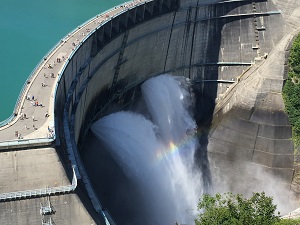 Curious to find out more about the energy that powers water? In this post we explore water energy, as well as its history and a breakdown of how environmentally friendly hydroelectric power generation is.

Hydropower is created by the movement of water. Hydroelectric stations convert the kinetic energy of flowing and falling water into electrical energy, on a small or large scale.

A Hydroelectric dam will sit across a river, blocking the flow downstream. The water then collects on the upstream side of the dam, forming an artificial lake called a reservoir. Holding the water in a dam converts its kinetic energy into potential energy. The reservoir acts like a battery, storing energy and releasing it in a controlled fashion.

How does kinetic energy work?

Humans have been using hydropower for more than 2,000 years. The first known use of water power was documented in Greek, Roman and Chinese texts. They described water wheels rotated by flowing rivers, turning millstones that would grind grain. In the US hydropower was first used commercially in 1880. The Grand Rapids Electric Light and Power Company used flowing water to power a water turbine and create electricity. It generated enough power to light up 16 lamps in a factory. The following year, hydropower was used to light all the street lamps in the city of Niagara Falls, New York. Hydropower now supplies 20% of the world’s electricity.

Water is a renewable source, as it is produced by a perpetual cycle of evaporation and precipitation. For this reason, hydroelectric power generation is considered environmentally friendly (despite the damage to the environment in the construction of dams).

The US, Canada, China, Brazil and Russia have the largest hydropower resources in the world. Not every water source is a usable one, however. Norway, Iceland and Canada are now using hydro energy as a major power source.

Hydroelectric power stations don’t necessarily require the construction of dams. Run-of-the-river stations are the simplest to build and have the less environmental effects. They use the natural flow of a river to power the station. The downside to this model is that the river needs to have a continuous, fast flow, and the generation of power cannot be managed as easily as with a dam.

Hydropower is arguably the energy of the future.  Worldenergy.org explain the potential of water energy:

“Hydropower is the most flexible and consistent of the renewable energy resources, capable of meeting base load electricity requirements as well as, with pumped storage technology, meeting peak and unexpected demand due to shortages or the use of intermittent power sources. There are many opportunities for hydropower development throughout the world and although there is no clear consensus, estimates indicate the availability of approximately 10,000 TWh/year of unutilised hydropower potential worldwide.”