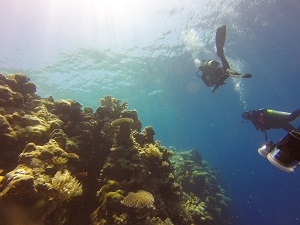 The world’s oceans are in trouble, nearly 50% of all marine life with vertebrae have declined in the last 40 years, according to a report by the World Wildlife Fund (WWF). To add to that, almost a third of the world’s fish stocks are being overfished, and three quarters of reefs are under threat by global warming resulting in coral bleaching.

What is happening under the ocean?

The oceans are a major element of Earth’s environment. Although human beings have come a long way in understanding the nature of the ocean there is still much more we need to learn. It is only recently that we have begun to understand patterns of marine circulation and changes within this system. Scientists are finding evidence of human-induced damage on an excessive scale. Scientists have discovered vast amounts of microplastics, along with destruction of coral ecosystems and marine life.

Overfishing has been happening for around 1,000 years. Writing for treehugger.com, Mat McDermott reveals:

“1000 years ago in Europe freshwater fish were already in decline, which led people in the region to take up marine fishing. Five hundred years later, with coastal fish stocks disappearing around Italy, deep-sea trawling began. The early 1800s saw the collapse of the European herring fishery, which in turn led to an increase in the jellyfish population, seriously altering the food web.”

Microplastics and other pollution is also killing marine life, around 80% of the contamination in the ocean begins on land. Fertilizers are causing widespread eutrophication, creating “dead zones”. This occurs when nitrogen-rich nutrients enter bodies of water, feeding algae growth and eventually suffocating any living creatures in the water.

Microplastics which are found in beauty and health care products are slipping through the sewerage filter system and entering the sea. These small pieces of plastics are harming marine life, fish who grow up in a polluted environment, preferring to eat plastics over their real food.

What can be done to help our oceans?

We know that the major planetary problems are mostly caused by humans. We can help give something back by being mindful about our individual actions. Things are already being put in place to help our oceans. The UK government banned microplastics in July 2017. There has also been an 85% drop in plastic bag usage since the 5p charge was introduced in 2015.

Cleaning up litter on the beach is a good start, but we can do so much more. First on the list is making safe and sustainable seafood choices; by refusing to purchase items that exploit marine life we can tangentially reduce our personal carbon footprint.

The ocean is a vital resource to billions of people around the world. We need to preserve it in any way that we can. Educate yourself and then share that knowledge with others. If you live in a coastal area, try to organise a beach clean. There are so many things we can do to make a difference, and it’s never too late to start.