Storm – the power of the ocean 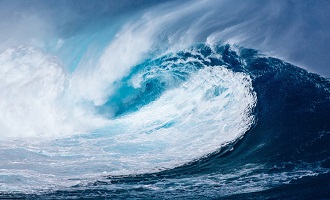 The ocean has a reputation for being a harsh mistress. We still have more to learn about Earth’s oceans and seas, with many areas left to explore and study. The one thing that has always been clear is the unstoppable, deadly power it can wield.

A storm surge will occur when there is low pressure, high winds and high tides. These storm conditions can change sea levels, and lead to coastal flooding. This can be very dangerous for anyone living in coastal areas. In January 2016, a large blizzard blanketed the east coast of the US. The storm named “Nor’easter”, violently churned up ocean water, pushing huge amounts of water and massive waves towards the coast of New Jersey. The water levels swelled to 6.61 feet and flooded the coast. The spring tide amplified the storm surge, causing major destruction. The “Bering sea superstorm” of 2011, with its combination of high tides and 100mph winds resulted in a 10foot storm surge which engulfed Nome, Alaska.

Sea storms develop when the air temperature in one region is different from the temperature in an adjacent region. Warmer air rises, cooler air drops. The movement of air creates a difference in pressure in the atmosphere. If pressure changes over a large enough area, it will cause the wind to blow in massive circles. This will result in clouds thickening, and heavy rain to fall. As the storm gains speed it grows larger, moving across the ocean. The winds in severe ocean storms can reach 155 mph and bring 59 inches of rain. The severity of the storm can cause large waves and storm surges.

One of the oceans most destructive forces is a Tsunami. These are caused by underwater earthquakes. As a result, 80% of all tsunamis occur within the Pacific ocean’s “Ring of fire”, a geological area where tectonic shifts make earthquakes and volcanos common. Tsunamis produce killer waves which can reach 100 feet high. On making landfall, powerful walls of water smash through everything in their path, causing massive destruction and loss of life.  At sea, a tsunami will only appear to be a few meters high, but as soon as they reach shallow water they slow down and build in height and power. Five minutes before reaching land, it produces a vacuum effect, sucking all the water from the sea floor. This is an important sign, and recognising it can save lives. A tsunami will travel across the ocean to the shore at a speed of 500mph, as fast as a 747 jet.

Coastal erosion is caused by wave action and tidal currents, as well as salt and acids in water which dissolve rock. Destructive waves will slowly cause cliffs to crumble and wash away. In some cases, whole cliff faces have broken off and fallen into the sea.

“Erosion is the natural process by which the sea and elements wear away the land, from small rockfalls to enormous landslides. The coastline only exists because of erosion and over time it has created the iconic landforms that so many people know and love – Chesil beach, Durdle Door, Lulworth Cove, Ladram Bay. Erosion keeps the cliff face fresh and the unique rock record well exposed, and as the rocks are eroded new fossils are revealed.”