Weird water – why H2O is the strangest liquid on Earth 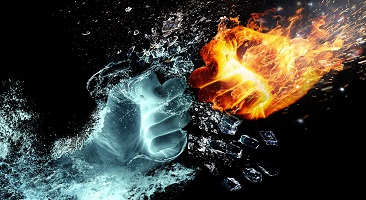 Water is an ubiquitous part of our lives; 71% of Earth’s surface is covered by water, Earth’s atmosphere contains 37.5 million billion gallons of water and our bodies are 60% water. There is no doubt water plays a huge part in our world and it is essential for all life that lives in it. Water is life and where there is water, life will be found in all its forms. It is for this reason that NASA have been searching the other planets in our solar system for any signs of water, because of the possibility that alien life may be found with it.

Water has always been a mystery. For hundreds of years scientists have been trying to understand it. Here are some strange facts about H20 that are still baffling us.

Known as the Mpemba Effect, this peculiar phenomenon was a source of frustration for many years. It was only recently that an explanation came forward. In a report for Science alert.com, Signe Dean wrote:

“The most commonly proposed hypothesis … is that hot water evaporates more quickly, losing mass and therefore needing to lose less heat in order to freeze. However, scientists have also demonstrated the Mpemba effect with closed containers where evaporation doesn’t take place. Another theoretical speculation is that water develops convection currents and temperature gradients as it cools. A rapidly cooling glass of hot water will have greater temperature differences throughout, and lose heat more quickly from the surface, whereas a uniformly cool glass of water has less of a temperature difference, and there’s less convection to accelerate the process. But this idea has not been entirely verified either.”

Water should technically be a gas

Water on earth should only exist as a vapour, the reason for this is that a water molecule is made from two very light atoms. In contrast, hydrogen sulphide is a gas – despite being twice the molecular weight of water.

Water will hold together, despite gravity or heavy objects trying to break it apart. This is due to its surface tension, the reason insects can walk on the water’s surface without falling through. In liquid form, hydrogen atoms of one water molecule are attracted to the oxygen atoms of another molecule. Each water molecule can form up to four of these hydrogen bonds. This gives water its surface tension, or “stickiness”.

If you drop a small amount of water on a surface hotter than its boiling point, water can skitter along the surface for a lot longer than you might expect. This is called the Leidenfrost effect. This will occur because the bottom level of the water drop will vaporise, but the gaseous water molecules in that layer do not have anywhere to escape. Their presence insulates the remainder of the water droplet and prevents it from coming into contact with the hot surface below. The droplet can then survive several seconds without boiling away.