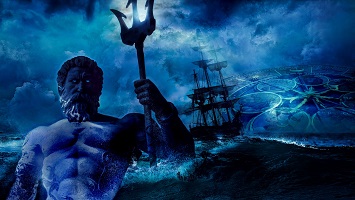 The four elements of earth, air, fire and water have long been associated with magical myths and legends. Water is said to be a feminine energy, connected to passion and emotion. For centuries water spirits and deities have featured in many cultures. In Greek mythology, water nymphs known as “Naiads” stood watch over streams and rivers. In ancient Britain, water spirits were thought to host bodies of water, such as wells and lakes.

As S.M Enzler MSc. explains on Lenntech water mythology, “Water plays an important role in many legends and myths. There are mythological water beings and gods, stories of heroes that have something to do with water, and even stories of isles and continents lost below the surface.”

Legends of the deep

The “lost” city of Atlantis is an island often thought of as a utopian society. The origins of Atlantis were first told in two of Plato’s dialogues, the “Timaeus” and the “Critias”, written around 330 B.C. Although a story of myth and legend, many have claimed that Atlantis was a real place. In 2016, an 8.5 mile pyramid was found off the coast of Mexico. The huge structure is said to be between 3.5 and 11 miles across. To Atlantis believers, this is a possible location for the lost city.

In the Scottish Highlands, the legend of Loch Ness Monster attracts enthusiasts worldwide. Colloquially known as “Nessie”, countless people claim to have seen her at various times over the last few decades. Interest in the lake spread worldwide following events on May 2nd 1933, when the creature was allegedly spotted by Alex Campbell, a part-time reporter. The report made Nessie famous, and stories of supposed sightings persist even today.

There have been scientific studies into the phenomenon, although none have offered proof of Nessie’s existence. If a giant prehistoric creature could live anywhere in Britain, however, it would be Loch Ness. The loch is huge – it is the largest body of freshwater in Britain, containing more water than all the other lakes in England, Wales and Scotland combined. At a depth of 745 feet in places, Loch Ness contains 263 thousand million cubic feet of water for a monster to hide in.

Another source of aquatic legend is the Bermuda Triangle, sometimes referred to as the Devil’s Triangle. Situated in the North Atlantic, it stretches from the tip of Florida to Puerto Rico and onto Bermuda Island, forming the triangle after which it is named.

It is within the Bermuda Triangle that aircraft and ships have mysteriously disappeared without a trace. Many have tried to explain the strange occurrences in the area. Some theories point to the paranormal and blame leftover technology from Atlantis or even alien activity. Natural explanations include unusual magnetic anomalies that could exist in the area and thermohaline circulation originating from the Gulf Stream.

A story familiar to any seafarer is the legend of the mermaid. Mermaids and mermen had the upper body of a human and instead of legs, had fish tails. The mer-people were said to be stunningly beautiful, residing under the sea. In folklore, mermaids were associated with misfortune, and were said to lure sailors off course and to their deaths.

Neptune is the Roman sea god, similar to Poseidon in Greek mythology. First appearing in texts around 399 B.C., the name “Neptune” means “moist” in Latin. He is depicted as an old man with a long white beard, carrying a three-pronged spear or trident. Neptune was said to have a violent nature and is associated with the unpredictable nature of the sea, as well as earthquakes and other natural disasters.

For Greeks, Poseidon was the protector of seafarers. According to their tales, he became Lord of the Sea following the defeat of his father, the Titan Kronos. Sailors would pray to Poseidon in hopes of a safe voyage on calm seas, occasionally drowning horses as a sacrifice.

In old British myths, the Lady of the Lake is the name of the ruler of Avalon. She played key roles in many stories. She is said to have bestowed King Arthur with his sword Excalibur and raised Lancelot from the grave. There are a number of locations across Britain associated with the Lady of the Lake, including Loch Arthur and Pomparles Bridge.