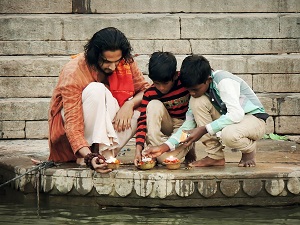 Many religions use water in their rituals and ceremonies. Water is used to purify and cleanse. It is thought to wash away impurities and pollutants, and cleanse the body both externally and spiritually. Water is seen as divinely powerful, without water there is no life and water has the power to destroy life as well as create it.

In Buddhism, water is used during funerals. Taylor Echolls explains in a post on Our Every Day Life, “Buddhists rarely bury the dead, as they believe the departing soul may catch sight of the body and attempt to re-animate the corpse. Instead, they conduct open air ceremonies so that the body may decompose quickly. Water burial, performed as a dedication to the water deities, releases the soul of the deceased back into the world. The ritual takes place in a river, with the body dismembered or cut into small pieces for fish to consume.” Buddhists also use water in ritual bathing.

In Eastern Christian and Roman Catholic churches, blessed water is used to bless churches and homes. Water is seen as a natural symbol of purification to remove uncleanliness. Holy water has been used in Christianity since the 4th century. The blessed water would be used in exorcisms, forming a sign of the holy cross.

The Islamic faith uses water in a ritual called “Wudu”. This a procedure which involves washing parts of the body with water, including the hands and feet. Wudu is an important part of ritual purity, and is done in preparation for formal prayers and before the handling and reading the Qur’an.

The Mikveh or Mikvah ritual is used in Judaism, and takes the form of ritual immersion. A Mikveh is a bath or pool used for several purposes, including the cleansing of women after childbirth or as part of the traditional procedure for those converting to Judaism.

The story of Noah’s Ark is one of the best loved children’s biblical stories. It tells the tale of Noah being instructed by God to build an Ark and save the animals from an impending flood. The story says that Noah and his family entered the ark and stayed there 7 days before the flood began. The subsequent rains flooded the Earth for 6 months. When the flood stopped and the water receded, the ark settled on top of Mount Ararat. Noah released a dove and when it returned with an olive branch, he knew that there was dry land and vegetation. Noah and his family then released all the animals from the ark.

The parting of the Red Sea is a biblical narrative from the Old Testament. It is a miracle performed through Moses as he “stretched out his hands over the sea”, resulting in the sea dividing and allowing the children of Israel to enter the Holy Land.