A short history of water wells 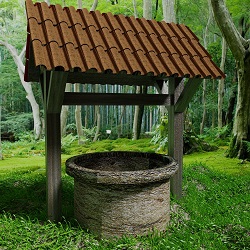 Water wells have a long history, dating back around 8,000 years. A well is an excavation or a structure which is created by digging or drilling a hole into the ground to reach water in underground aquifers. The water can then be drawn up by either a pump or bucket, raised mechanically or by hand.

Wells were first dug in the Neolithic era, which was around 7,000 – 10,000 BC. The construction of the first wells appears to have been in farming regions. By the time the use of iron, copper and bronze tools became common, wells had sprung up in most settlements.

The oldest known well was discovered in Atlit Yam, Israel. Archaeologists dated the well back to 8100-7500. Neolithic wells found in Europe were wood-lined and date from the iron age.

Up until the early 19th century, wells were still dug by hand. It wasn’t until 1808 that mechanical drilling was used to create wells. By 1884 wooden drilling rigs were in use, and then as time went on, steam-driven drilling machines were being used. By the early 20th century rotary drilling technology become common after the invention of the roller cone drill bit in 1908 by Howard Hughes Sr.

USGS, Science for a changing world explain, “Wells are extremely important to all societies. In many places wells provide a reliable and ample supply of water for home uses, irrigation, and industries. Where surface water is scarce, such as in desert, people couldn’t survive and thrive without groundwater.”

The deepest hand dug well in the world is in Brighton, East Sussex. The Woodingdean Well is 1,285 feet deep (392m), and is as deep as the Empire State Building is tall! Work began on the Woodingdean well in March 1858 by the Brighton Guardians. The well was dug 24 hours a day for four years. Diggers dug by candlelight. One winchman even lost his life when he fell and plunged to his death.

Water was finally reached on the evening of Sunday March 16th 1862. At the bottom of the well a bricklayer noticed that the ground he was standing on was slowly being pushed up. The men scrambled up ladders to evacuate the well which was only 4ft wide. It took 45 minutes to reach the top of the well. Suddenly there was a roar, as water flooded up the well shaft – water had been found at last. Woodingdean Well can be found at the entrance of Nuffield Hospital.

Wells have a long tradition with folklore. Wishing wells are popular in European folklore. Germanic and Celtic people thought of springs and wells as sacred places. Occasionally, wooden figures were put on the well, possibly as a symbol of the God associated with the pool. Water was thought to have healing powers, so many people would drink it, bathe in it or wish over it. People would make a wish and toss a coin into the well. That wish would then be granted depending on how it landed at the bottom – heads and it would be granted, tails the wish would be ignored. Today, wishing wells are used at weddings for guests to donate money gifts to the bride and groom.

‘Healing’ wells and spas were popular in the 19th century. These wells were thought to contain water with the healing properties to cure 19 known ailments. The Shingle Bell Well in Limpley Stoke was famous for healing diseases in the eyes. A healing well in Biddestone was said to have cured a lady of having hysterical fits.