What lies beneath – ecosystems of our oceans 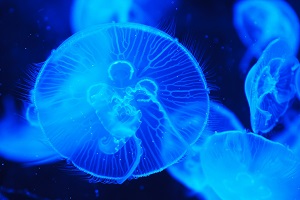 Our oceans hold the largest ecosystems on earth. Our planet requires healthy oceans for us to survive; they are our life support system generating half the oxygen that we breathe. Over 97% of water on earth is in our oceans, and they hold vast undiscovered worlds; at present only 10% of our oceans floor has been mapped accurately and very little is known about it.

It’s surprising when you think about the many astronauts who have walked on the moon compared to just three people who have delved to the deepest depth of our ocean, called the Mariana Trench, two scientists back in 1960 and the film director James Cameron. The deepest part of the sea, the Mariana Trench, is 7 miles, and is located in the western Pacific Ocean. The Mariana Trench is so deep you could fit Mount Everest in to it and still have a few extra miles to spare! Trenches are made up from shifting tectonic plates. The depths of the ocean that got below 20,000ft to the very bottom of the sea trench is called the Hadal Zone.

The pressure of water at those depths is huge, approximately 8 tons per square inch! There are shrimp like creatures called Amphipods, that survive in ecosystems at the bottom of the Mariana Trench, thriving on dead sea creatures which float down from above. Scientists believe that the study of the Hadal Zone may help us understand how life may survive in space.

What is an ecosystem?

An ecosystem includes animals, plants and organisms living in a given area, interacting with each other. This also includes their non-living environments such as weather, earth, soil, climate, atmosphere and sun. Within an ecosystem, each organism has its own niche. If you think about a garden pond for example, you will find lots of different things living in it, from microorganisms to plants and fish. What lives in it will thrive depending on its nonliving environment, so this would include factors like the temperature of the water, sunlight and nutrients to support life. Ecosystems are very complex; if the slightest thing altered within that ecosystem it could be disastrous. This is because of external factors, such as a rise in temperature, can alter the natural balance, causing the ecosystem to collapse.

Why are ecosystems important?

Marine conservation is the protection and preservation of ecosystems in the oceans and seas. The importance of conservation is so to protect the vulnerable species of marine life, preventing and restoring the damage caused by human pollution and environmental changes. Microplastics are one of the growing problems in our oceans. Alice Horton who blogs for Centre for Ecology & Hydrology writes “Plastic particles of less than 5mm diameter, are an issue of growing concern as they persist in the environment. They have been widely studied in marine ecosystems but, until now, no studies have investigated their presence in rivers in the UK.”  Microplastics have a huge impact on ecosystems.

Postgraduate researcher, Stephanie Wright from Biosciences found that ocean sediment had been heavily contaminated with Microplastics. The deterioration of coral reefs is another issue linked to human activity, such as excessive carbon dioxide in our atmosphere, because our oceans absorb the atmosphere wherever air meets water, our oceans a slowly being poisoned. The CO2 produced by humans has a catastrophic effect on sea life and the ecosystems within the ocean. The increasing levels of CO2 are altering the chemistry of the seawater by decreasing the PH levels, this is known as Acidification. Ecosystems are in decline. According to the 2005 Millennium Ecosystem Assessment, around 60% of ecosystem services that support life on earth are degrading or being used up faster than they can be replenished. Human life depends on healthy ecosystems on land and sea; it can include everything from clean air to food and water. Charities such as the Marine Conservation Society, aim to educate people on the impact that humans have on the environment, and strive to protect marine wildlife, fisheries, clean beaches and seas.