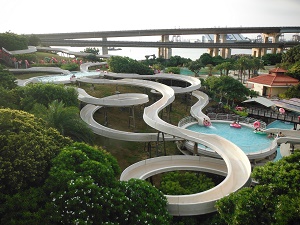 Summer will soon be here, and what better way to spend a hot summer day than at a water park. Whether you take the kids for an exciting day out, or maybe you’re a bit of an adrenaline junkie yourself and enjoy the extreme rides, there is no doubt that these parks provide great family entertainment. The first water parks opened in the 1960’s, which were mostly individual slides and wet rides, however Wet ‘n Wild water park in Orlando, which opened its gates in 1977, was the premier of the large scale water parks, which we are familiar with today.  There was four other Wet ‘n Wild water parks that opened across the US over the subsequent years. The original park in Orlando has expanded considerably since its early days and is now owned by Universal Studios. Here is a look at the greatest water parks in the world today.

This is the largest park in China, and is operated by the Chimelong Group. The park cost a whopping 1 billion RMB to construct! This huge park stretches over 60 hectares and contains over 60 attractions. Over 50,000 visitors come to this park daily. This enormous park has everything; large wave pool, children’s aqua play area, speed slides and is home to the first tornado ride in china.

This park really does have everything! Situated on a 42 acre area, Aquaventure has a huge range of adrenaline pumping rides, including the 90 foot drop tube slide that propels you through a tunnel into shark infested waters! This park has a private beach and exclusive reserved seating area.

Aquatica will certainly not disappoint; with its Dolphin Plunge, this park is truly amazing. The two enclosed tube slides pass through a pool of black and white Commerson’s Dolphins. Among other attractions are Tassie’s Twisters, Taumata Racer body slide, Whanau Way and Ihu’s Breakaway Falls. This resort also has two wave pools and a large beach area with sunbeds and deck chairs.

This is the largest park in South America. Beach Park is located at Porto das Dunas, Brazil, and attracts over 1 million visitors a year. With many family attractions and extreme rides this is the biggest tourist attraction in Latin America. The Acqua Circo (Water Circus) offers a variety of fountains, slides, tunnels, jets and cannons. A pool which is covered by two stylised tarpaulins represents a circus big top.

This park, originally built for the 2008 Olympic Games, for hosting the swimming events. It is now one of Beijing’s top tourist attractions. The Watercube looks like a huge blue box from which it gets its name. This aquatics centre has slides, wave pools, kid’s area, speed slides and spa areas.