Spectacular colours of the sea 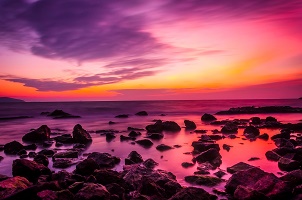 We have already seen river water’s alternating colours of green, brown and yellow and that the spectacular colours of the sea are caused by several factors. But what are these factors and how do they cause some oceans to be turquoise, red and even fluorescent?

The fluorescence of Vaadhoo Island

In the middle of the Indian Ocean lies an isolated island, holding a mystery. The island called Vaadhoo, is known for its amazing “Sea of Stars” where the waters glow neon blue at night.

This phenomenon occurs due to a micro-organism reacting to oxygen. The movement of the water produces the bacteria in the phytoplankton called dinoflagellates to become bioluminescent. The nighttime glow from the beach is in complete contrast to the red murky stain from the red algae, present in the daytime. This alien like event is so rare it’s being proclaimed as a ‘Wonder of the World.’

The red of Laguna Colorada, Bolivia

Everyone has heard of the Red Sea, but it isn’t actually red, more a rusty colour. There is a shallow salt lake in Bolivia, however, that on first inspection resembles a blood bath, comprising pure scarlet waters as far as the eye can see. This freak of nature is due to a high concentration of a red pigmented algae, and not as local folklore tell it, transference from the large number of Flamingo it attracts.

This unique tri-coloured formation of lakes is situated on the same volcanic peak. It is said that the spirits of the ancestors cause the lakes to change colour. The lakes all have their own identities:

The general consensus of scientists is that chemical reactions are being triggered by volcanic gas activity, which drives nutrient rich water to the surface. This chemical combination results in the striking colours of the lakes. In fact there is no hard evidence to prove this, leaving the radical colour changes in the lakes open to the far more romantic notions of water spirits’ changing moods.

This body of water contains a high concentration of finely-ground rock particles which is the result of glacial erosion. The glacial flour, as it’s named produces a cloudy-baby blue colour ( often referred to as glacial milk). Lake Pukaki, nestled at the foot of Aoraki Mount Cook, was so mesmerising in its brilliance that it was chosen as the setting for Lake Town in The Hobbit.

The rest, as they say, is history.

The colour of the ocean isn’t just important as a guide to a safe swimming zone. Marine biologists and scientists use the colour of the sea to determine the state of ocean plant life and even monitor climate change. The greener the water, the higher the density of phytoplankton, which translates into more carbon dioxide, extracted from the atmosphere and in turn a greater supply of oxygen. This plays such an important role in the global carbon cycle that the colour of the sea is regulated by NASA Satellites for phytoplankton volume and these CO2 concentrations are used to determine future climate trends. Whether an ocean is blue, green, red or black, the mysteries of it will never cease to amaze.